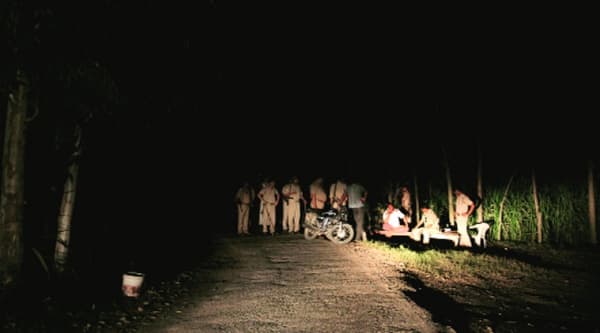 Policemen at the spot where the bodies were found, in Muzaffarnagar on Monday. Source: Ravi Kanojia

Three men aged between 25 and 45 years — all working in town and all fathers — were found brutally killed on the narrow road to Bahadurpur village in Muzaffarnagar on Saturday night, leading to tension in the district.

A search operation was launched after two of the missing men failed to return from their jobs and the third never reached the factory where he worked.

Though residents of the same village, they worked in different areas and lived in separate parts of the village owing to their castes. Their mutilated bodies with signs of violence in the groin area were found lying metres from each other.

The timeline of events suggests the three men — Surender, 38, Sunder, 28, and Kunwerpal, 43, — were on the lane leading to the village from Jansath road after 7:30 pm on Saturday. While there were no witnesses, the police believe all three murders took place on this lane, which is mostly deserted after sundown.

The police said the postmortem reports have revealed that all three had been repeatedly attacked by the “same” sharp instrument. Most of the  injuries were on the neck and the head. All three had received injuries in the groin area.

“We are looking to identify the motive. It is still too early to say whether this is a communal matter,” said Muzaffarnagar SSP H N Singh. He added that extra security has been given to the village and elders consulted to prevent communal tension.

Villagers said Surender, who belongs to the Kashyap caste, was probably the first victim although his body was the second to be found. “He had come home from the chemical factory where he worked because he was feeling ill. He had dinner and left for work at 7:30 pm. But when others came back from the factory and said that he had never reached, we went out to look for him,” said his brother Suresh.

“He was mercilessly attacked. We couldn’t recognise him. The lunch he had packed was lying next to him, untouched,” said Suresh. Surender is survived by his wife and four children.

The search party left to look for Surender at a little past 10:30 pm. After more than an hour of looking along the village road, which is flanked by sugarcane fields and a forest, it first discovered Sunder’s body. It was only then that the villagers realised something was amiss. “After Sunder, we discovered Surender at midnight and Kunwerpal at around 6 am,” added Suresh.

Police first thought Sunder, who was returning from his job as a driver in Muzaffarnagar, was killed in a particularly brutal case of robbery. “But the Rs 8,000 in Sunder’s pocket, which he had received as his salary, was left untouched,” said a senior officer.

Sunder, a Dalit, is survived by his wife Sashi and eight-year-old son Aditya. “He called me at 7:30 pm and told me that he was on his way home. He usually reaches by 9 pm. When he didn’t, I tried calling him but got no response,” Sashi said.

Sunder’s phone was later found lying next to his body. The police said they found that Sunder had taken the bus back from the city and was apparently attacked while he was walking back home.

The last to be found was Kunwerpal, whose body lay close to the Jansath road, a few metres away from a disused police post. “The police have promised action. They have asked us to wait for a few days and stay calm. But it’s very difficult to be calm,” said Amarpal, his elder brother.

Father to a son, Kunwerpal belonged to the Valmiki community and worked in a restaurant in the city.

Thu Jun 4 , 2020
ROPAR: A middle-aged man in Morinda town of Ropar district allegedly made a murderous attack on five of his family members including wife, sister-in-law, mother-in-law and his two nephews leaving two dead and two seriously hospitalized. The police revealed that accused identified as Alam Jogi, 30, of Morinda was living […]