Nearly 50,000 people staying close to the seashore and landslide-prone areas in Mumbai were either evacuated or they themselves moved to safer locations ahead of Cyclone ‘Nisarga’, which hit the Maharashtra coast on Wednesday, although the country’s financial capital largely remained unscathed by it.


Cyclone Nisarga hit the state coast near Alibaug in Raigad district with a wind speed upto 120 kmph on Wednesday afternoon, but weakened in the evening and moved towards north-east Maharashtra, sparing Mumbai and other areas.

The Brihanmumbai Municipal Corporation (BMC) said that since Tuesday it evacuated nearly 20,000 citizens to the temporary shelters and other 30,000 shifted on their own to safer locations in response to its advisory. Municipal workers use a bulldozer to clear uprooted trees from a road that fell during Cyclone Nisarga, in Mumbai


The BMC said that the city witnessed 117 incidents of tree fall, nine incidents of wall or portion of house collapse, but there was no report of any casualty or injury due to the cyclone.


BMC sources said that the maximum number of people evacuated by the civic body were from slums and fisherfolk localities along the west coast, including areas like Colaba, Worli, Versova, Malad and Gorai. Residents of Geeta Nagar slum take shelter at a safer place during Cyclone Nisarga, in Mumbai


The BMC said that all these evacuated people were moved into 35 schools that were converted into temporary shelters.


In its statement, the BMC said that Municipal Commissioner I S Chahal directed to keep all the evacuees under observation for one day and they will be permitted go to after being screened for temperature and oxygen levels to ensure that they do not have symptoms of Covid-19. A vessel in the rough sea during Cyclone Nisarga, at Colaba in Mumbai


It said that between 8 am to 6 pm on Wednesday, 117 complaints of tree fall were reported in Mumbai, of which 39 were from south Mumbai, 40 from eastern suburbs and 38 from western suburbs.


It further said that 39 incidents of short-circuit were reported in the city during the same period and nine incidents of house fall, including three were from south Mumbai and four from western suburbs, were reported on Wednesday. 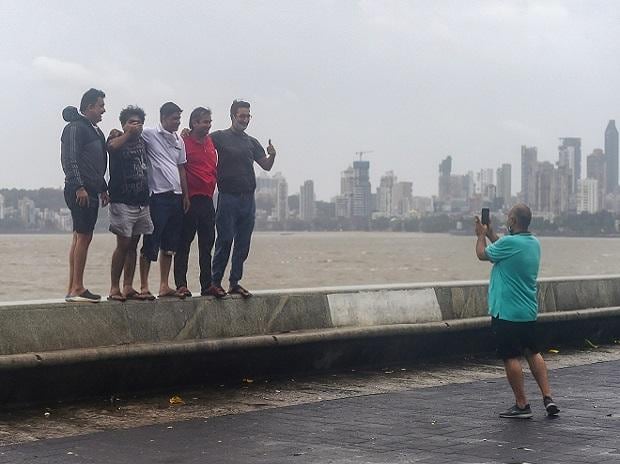 A group of people pose for pictures at Marine drive during Cyclone Nisarga, in Mumbai


A spokesperson of Mahanagar Gas Ltd, which supplies piped cooking gas to the city, said that a pipeline supplying gas to a society in Ghatkopar West was ruptured due to tree fall, but it was immediately attended and gas supply stopped.


A purported video of falling of scaffolding around a building, said to be from suburban Bandra of Mumbai was being circulated on social media and another video about damage to a temporary rain shed on a building in South Mumbai was reported by the regional news channels. 
The civic body, however, said that no injuries were reported in any of these two incidents.


No other untoward incident was reported.


According to the statement, the BMC’s disaster response machinery will remain on high alert for the next few days until the cyclonic effect has passed from the city.


Quoting the India Meteorological Department (IMD), the civic body in its statement predicted moderate to heavy rain with strong gusty winds in the city and suburbs along with extremely heavy rainfall at isolated places for Thursday cloudy sky with light to moderate rain for the next 48 hours.


According to the BMC, a high tide of more than four meters is expected on Thursday at 10.57 am.

Thu Jun 4 , 2020
Thiruvananthapuram: Inter-district boat services will resume in the state on Thursday, ferrying between 5am and 9pm.There are 54 boats and five rescue boats with water transport department. The department operated 748 services daily before lockdown. Except the boats ferrying in Vaikom-Ernakulam route, all other services will be operated from Thursday. […]