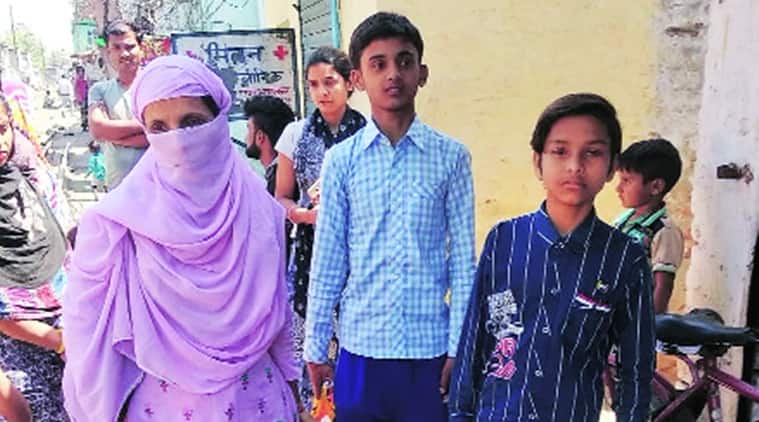 Savita with her sons at Ludhiana railway station, Wednesday. Her husband committed suicide on May 9 after allegedly failing to get ration for family. Express photo

12 days after her husband committed suicide at their rented accommodation in Rajiv Gandhi Colony of Ludhiana , allegedly after failing to arrange ration for the family during lockdown, Savita and her two children Wednesday boarded a Shramik Special train for Azamgarh in Uttar Pradesh.

From Azamgarh, they will be further traveling some 50 kms to reach their native village in district Mau.
Savita (35), who had come to Ludhiana with her husband as a newly-wed bride nearly 15 years back, said she was returning empty-handed after losing the “most precious thing in her life in this city”.

With two bags stuffed with some clothes including that of her dead husband, his one photograph and some cash she got as help from others after the tragedy on May 9, she boarded the train from Ludhiana with sons Pranshu (14) and Himanshu (12).
“Hum isse pehle kabhi sheher nahi gaye. Pehla shehar tha Ludhiana jo dekha humne. Ab issi sheher mein apni sabse keemti cheez kho kar jaa rahe hain. (I had never been to a city. Ludhiana was the first city I saw. I am returning from this city after losing my most precious thing),” Savita said as as she and her children burst into tears.

“Insaan se keemti to kuch nahi hota na, hamare pati chale gaye. Lockdown se pehle jaise bhi rehte they, khush they hum (Nothing is more valuable than a person. My husband is gone. Before lockdown, we were happy in our world),” she added.

Her husband Ajit Kumar Rai (38) hanged himself to death on the night of May 9, after alleged harassment for days that he faced while failing to get ration for family despite registering on government helpline numbers and running out of work due to lockdown.

Savita too used to work at a factory but since the lockdown, she too was temporarily laid-off. According to Savita, her husband stood in queue for days outside Focal Point police station to get ration, but always returned empty-handed.

Ironically, on Wednesday, when she left home with children for railway station, she did not had to face any harassment or stand in queues like thousands of other migrants to get train tickets. The administration and police had made all arrangements and their tickets were pre-booked.

“Par ab hamare liye ye sab lena dena mitti ke baraabar hai (these mean nothing to us now),” said Savita. “This city has snatched my life from me. I do not know whom to blame”.

She is headed for her in-laws place. Savita feels that she may return to Ludhiana, for livelihood and future of her children. “I have not vacated our rented room yet. I doubt if my brother or brother-in-law would agree to let us stay with them or educate my children. I might return after some months and start working here. For now, both children have dropped out from school,” she said.

Ajit worked as a daily wager and used to pull a rehra (wooden cart), ferrying goods and earning Rs 500-1,000 a day.

“We had to sell the rehra for Rs 2,000 during lockdown to get some cash in hand,” said Savita.
Himanshu, the younger son, added: “Earlier also (after the lockdown began), Papa tried to take us back to UP but police would turn us back. Today we are going without him”.

“The day Ajit committed suicide, he had Rs 2,200 in his bank account, which he was unable to withdraw. The family has not received any compensation from the Punjab government but senior Ludhiana officials – deputy commissioner Pradeep Agrawal and DCP (HQ) Akhil Chaudhary – arranged an initial aid of Rs 51,000 at their own level,” said RK Yadav, president, Manav Samaj Swastha Sewa Sangathan, who was at the station to see-off the family.

Chaudhary said that civil and police administration coordinated to arrange initial aid of Rs 51,000 for family and they have been sent home as per their wish.

Mon Jun 1 , 2020
JAIPUR: Sawai Man Singh (SMS) Hospital, which was converted into a Covid-19 centre, will now handle others patients. RUHS Hospital at Pratap Nagar will be the new Covid-19 treatment hospital in the city. In an effort to make SMS Hospital free from Covid-19 patients, the last 61 patients were shifted […]