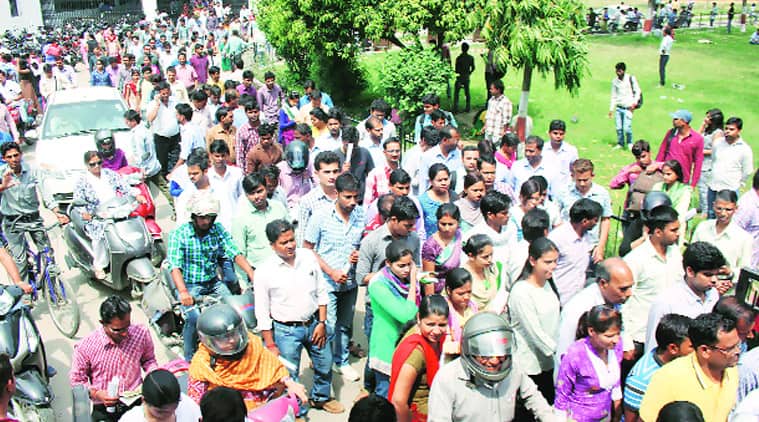 The PCS paper was leaked on Sunday just before the examination was about to start, leaving lakhs of aspirants high and dry. (Source: Express Photo)

The Uttar Pradesh government has cancelled the provincial civil services preliminary examination (UPPCS) after an exam paper was leaked on WhatsApp messaging service just before the start of the examination.

“The preliminary examination of UPPCS has been cancelled on the directives of the Chief Minister. He has summoned the Chief Secretary, Director General of Police and other senior officers to enquire into the matter,” a senior officer said in Lucknow.

The Chief Minister has also summoned Chairman of UPPSC Anil Yadav. The action has been taken after preliminary report of the Special Task Force of Uttar Pradesh Police.

The PCS paper was leaked on Sunday just before the examination was about to start, leaving lakhs of aspirants high and dry.

The news of the paper leak had spread like wildfire while the first shift of the Preliminary exams, held between 9.30 am and 11.30 am was underway.

“The paper was leaked at about 9.15 am on WhatsApp messenger before start of the examination. It has matched with the original paper of PCS preliminary. We have informed the Chief Minister and Chief Secretary in this regard,” Director General of Police (DGP) A K Jain had said.

Around 4.5 lakh candidates had appeared in 917 centres across the state, including 70,000 candidates in Lucknow who took the test in 148 centres.

As the news of the paper leak spread, students had staged massive protest outside the Public Service Commission office in Aliganj.

Similar protests were witnessed in Allahabad with hundreds of youths gathering in front of the UP Public Service Commission there, setting fire to an effigy of the panel’s Chairman and demanding his immediate removal.

Several candidates and their guardians had also protested in Kanpur.

The matter prompted opposition parties to demand a CBI probe and dismissal of UPPSC head, who has been in the eye of a storm since 2013 when a controversial reservation policy was introduced by the UPPSC, introducing caste-based reservations at the preliminary stage itself.

The policy was scrapped following violent agitations in the city and petitions in the Allahabad High Court even as the embarrassed Samajwadi Party government claimed that the UPPSC had acted without taking the government’s approval.

Chandigarh: ‘Ambulance stayed out, we took her in stretcher’ | Chandigarh News

Wed Jun 3 , 2020
CHANDIGARH: An 80-year-old woman from Sector 30 on Tuesday tested positive for novel coronavirus after she died in an ambulance while on way to a hospital on Monday, pushing the death toll to five. Relatives alleged they had to carry her on a stretcher to the ambulance from their house […]