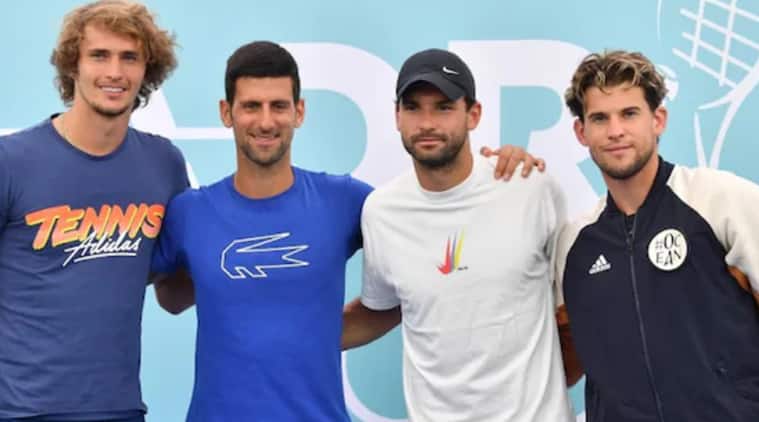 The players Grigor Dimitrov (second from right) was in contact with over the past week includes world no 1 Djokovic, Dominic Thiem and Alexander Zverev. (AFP Photo)

An Instagram post by Grigor Dimitrov started to gather attention just 30 minutes before the final of the second leg of the Adria Tour, between Novak Djokovic and world no 14 Andrey Rublev. Dimitrov, a former world no 3, has his face covered with a mask in the photograph, and announces in the description that he has tested positive for COVID-19.

“I want to reach out and let my fans and friends know that I tested positive back in Monaco for Covid-19,” reads his statement. “I want to make sure anyone who has been in contact with me during these past days gets tested and takes the necessary precautions. I am so sorry for any harm I might have caused. I am back home now and recovering.”

The players he was in contact with over the past week includes world no 1 Djokovic, Rublev, the current world no 3 and 7, Dominic Thiem and Alexander Zverev respectively along with other players. The group of players, starting from June 12, met at the Novak Tennis Centre in Belgrade, Serbia, for the first leg of the regional Adria Tour – a charity event created by the Djokovic.

The event has received criticism over the fact that there appears to be no such precautions in place in terms of social distancing, as players were seen hugging, and the stadium was filled to capacity with not many wearing masks in the stands.

“I know there has been some criticism, especially from the West,” the world no 1 told Eurosport. “Why do we have viewers there? Why is there no social distancing? Why is this kind of event taking place while there is a serious pandemic in the West? It is not easy to explain to people that the situation in the United States or Great Britain is completely different from that in Serbia or the surrounding countries. We followed the rules and measures laid down by the government and public health institutions from day one. We didn’t cross the line. We went through all these processes, and the overall result was fantastic.”

Now, as the second leg of the event, held in Zadar, Croatia, nears its conclusion, Dimitrov testing positive will raise questions about the event taking place at all.

The 29-year-old Bulgarian reportedly pulled out of the two-day event in Zadar after losing 4-1, 4-1 to world no 33 Borna Coric on Saturday.

Well, that was not a match. Something wasn’t quite alright with Dimitrov. He chose not to shake hands rather just fistpump the umpire. pic.twitter.com/FmHDVlHpAZ

“This is a consequence of physical effort and exposure to the sun in the past few days, and I will have to miss the last day in Zadar,” he had said to Sport Klub at the time.

Dimitrov becomes only the second tennis player to have tested positive for the Coronavirus, after Thiago Seyboth Wild contracted the virus shortly after winning his first ever ATP title, the Chile Open in March.

Meanwhile, the Adria Tour’s third leg is scheduled to take place in Montenegro on June 27-28, followed by the final leg in Banja Luka, Bosnia-Herzegovina on July 3-4.

Noida's Sector-50 Metro Station To Be Dedicated For Transgender Community