In a tweet addressed to Sood, former Shivraj minister Rajendra Shukla on Tuesday sought help for migrants in Mumbai who wanted to go to back their homes in Madhya Pradesh’s Rewa and Satna.

Bhopal: Amid simmering tension in the BJP camp for ministerial berths ahead of an expected cabinet expansion in Madhya Pradesh, a senior BJP leader has made his own party see red by seeking help from actor Sonu Sood in bringing back migrant labourers stranded due to COVID-19 lockdown.

Sood, a Bollywood actor, has been winning praise for his efforts in helping migrants amid lockdown.

In a tweet addressed to Sood, former Shivraj minister Rajendra Shukla on Tuesday sought help for migrants in Mumbai who wanted to go to back their homes

in Madhya Pradesh’s Rewa and Satna. 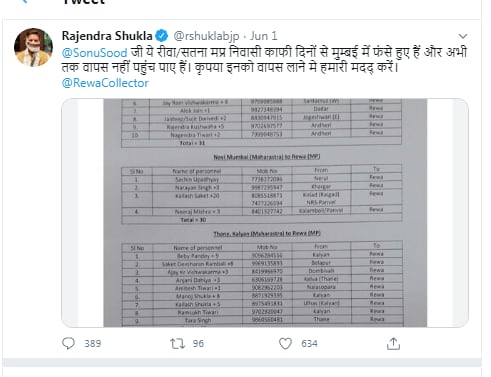 The actor, who has been responding to similar tweets directed at him, was quick to reply, saying, “Sir, koi bhai kahin nahin fansega. Aapke pravasi bhai kal aapke pass bhej denge. Kabhi MP aaye to poha khila dena. (Sir, no brother will remain stranded anywhere. You people will be sent back to you tomorrow. Hope you treat me to poha (a famous MP snack) whenever I visit the state).” Congress leader Alka Lamba was quick to slam Shukla for asking from a celebrity despite his own party being in power in the state.

“I can’t believe my eyes. He (Shukla) is a former minister and MLA, and has his party in power in MP and Centre. He has party MLAs and MPs in Maharashtra and he is seeking help from actor Sonu Sood. If you have any shame left, resign and sit at home,” Lamba said in a tweet.

Arun Yadav, former MPCC president, also criticised Shukla, saying, “Ex-minister’s tweet exposes the bitter truth of MP. Shivraj ji see this, your former minister and MLA has no faith in your government and he had to seek help from actor Sonu Sood for bringing back his migrant labourers stuck in Mumbai.”

Congress MLA Kunal Chaudhary claimed that Shukla’s tweet indicates there has been a scam on the pretext of bringing back migrant labourers in Madhya Pradesh.

As the matter gathered steam, Shukla deleted the tweet from his handle. Tagging reports of Shramik Special Trains that are bringing back migrants in his region, Shukla said 45 such trains have brought back 42,000 migrants in the region. Congressmen, he claimed, have holed up in their homes due to fear of virus and have no idea that lakhs of Vindhya region migrants have returned to native places with help from the Centre and state.

Political observers see an interesting aspect in Shukla’s tweet: With the Shivraj Singh Chauhan cabinet due for an expansion, party seniors are apprehensive of their berths as the party needs to accommodate several turncoats who deserted Congress and joined BJP reportedly after being promised ministerial berths.

The party reportedly plans to accommodate several seniors, including Shukla, into the party organisation. On Tuesday, three senior leaders — Gopal Bhargav, Vijay Shah and Gaurihankar Bisen — met in Bhopal and later called on the Chief Minister. Their meeting was seen as a growing concern among party seniors for the ministerial berths.

At present, Shivraj cabinet has five ministers, including two from the Jyotiradita Scindia camp.