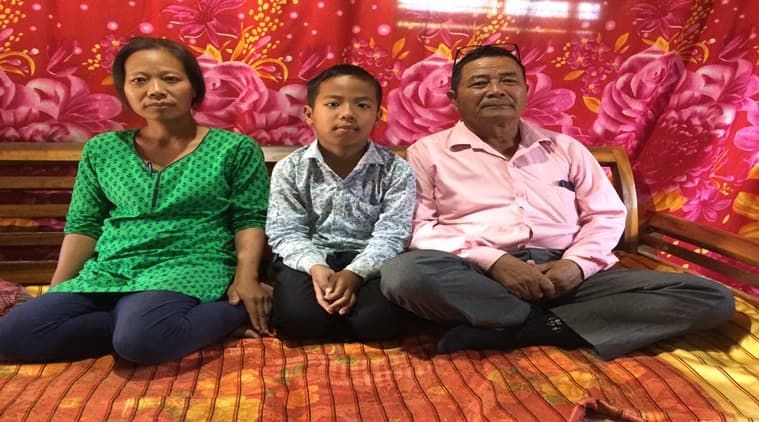 Isaac with his parents

Isaac Paulallungmuan Vaiphei from Churachandpur district of Manipur created history in the state by becoming the youngest person to clear the class 10 board exam at the age of just over 12-years-old.

Isaac is a student of Mount Olive School, Kangvai village. He secured first division with 72 per cent in the board exams declared on Monday (June 15). He turned 12 in November 2019.

The approval was given by the administrative board members of the Manipur Board based on a psychological test conducted on the boy in the last week of November 2019. The administrative members termed the boy’s case “special case” considering the boy’s mental age and superior IQ.

“I am very happy that I cleared the exam and became the youngest student to do so. But, I am a little disappointed with the result. I was expecting more like in the top 20,” said Isaac. Nevertheless, the boy is still determined to do better in the next exams. He aspires to become an IAS officer.

According to the test results conducted by the Department of Clinical Psychology RIMS Imphal, Isaac’s “mental age” was 17 years 5 months and his basal age was 14 years and the terminal age was 22 years. His IQ is 141 which is of very superior intellectual and development functioning, according to the result.

Genkholien Vaiphei, the boy’s father, said, “We are very thankful to the government including the Chief Minister for giving this opportunity to my son. This is a historic moment for our family as well as for the entire state.”

Isaac was 11 years old and studying in class 9 when his father first submitted an application seeking permission from the board to allow his son to appear in the HSLC exam. However, his request was denied citing his age factor.

The Vaiphei was asked to change the age of his boy to 15 so that he could appear in the exams. However, Vaiphei approached the higher authority following the boy’s determination. Subsequently, upon his (Vaiphei) application, the commissioner of the education department ordered to conduct a psychology test on the boy.

Isaac’s inspiration to become the youngest person in the state to clear class 10 exam came from a child prodigy, Naina Jaiswal of Hyderabad, who cleared class board exams at the age of eight.

Isaac did his schooling till class 8 at Mount Olive School, Kangvai, Churachandpur run by his father. His parents shifted him to Rayburn High School (CBSE) in June 2018 following his earnest desire to write his class 10 exams and growing confidence in his ability. After three months at Rayburn his application was rejected citing the age factor. Later the same year, he was again enrolled in Mount Olive School.

Mon Jun 22 , 2020
Amazfit Stratos 3 smartwatch has been launched in India with tracking support for 80 different sports modes. The company had teased the launch of the smartwatch in India, having been globally revealed in August of last year. The Amazfit Stratos 3 comes with a circular dial and a transflective display. […]