Maharashtra and Gujarat on Tuesday geared up for Cyclone Nisarga, which is expected to make landfall on Wednesday evening near Alibaug, south of Mumbai.

With the India Meteorological Department declaring a red alert in Mumbai for the first cyclone that has formed near the city on the Arabian Sea in a long time, Maharashtra Chief Minister Uddhav Thackeray, in a televised address, advised people to remain indoors.

Raigad district authorities started evacuating residents from coastal areas. Teams of National Disaster Response Force (NDRF) and India Coast Guard have also been deployed. Alibaug, Uran, Murud and Shrivardhan — all shore-based talukas — are on high alert, while Pen, Panvel Mhasala and Tala, which are creek-based, are on alert.

Here are the latest updates:

Five special trains departing from Mumbai have been rescheduled and three special trains will be either diverted or regulated enroute, the Central Railway (CR) said in a release.

Thiruvananthapuram-LTT Special scheduled to arrive 4.40pm will be diverted via Pune to arrive at the Lokmanya Tilak Terminus (LTT) here behind schedule, it added.

According to the Konkan Railway, it has diverted the Ernakulam H.Nizamuddin Special and Thiruvananthapuram Central-LTT Special trains, which departed on June 2, via Madgaon Junction-Londa-Miraj Pune Manmad route.

It is expected to move north-eastwards and cross Maharashtra coast, close to the south of Alibagh, today afternoon as a severe cyclonic storm with a maximum sustained wind speed of 100-110 kmph gusting to 120 kmph. 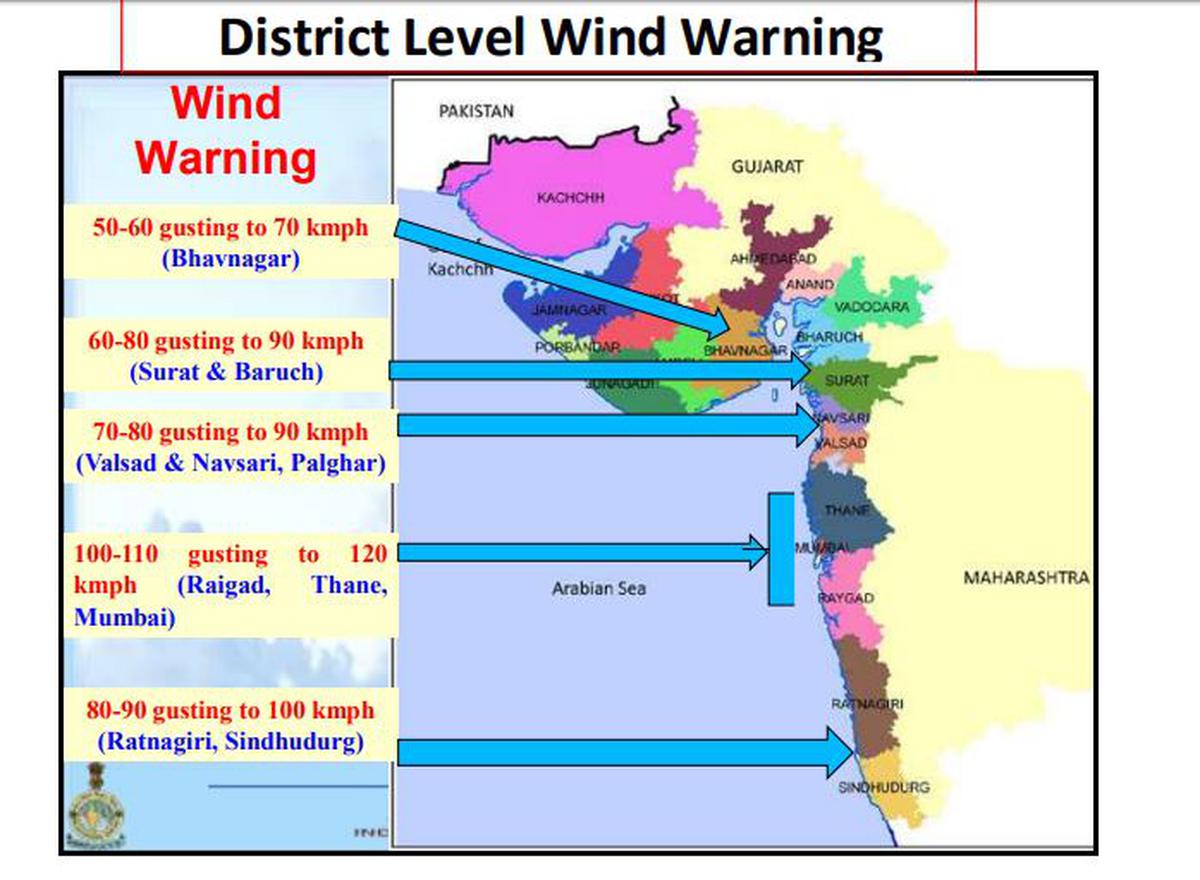 Alert sounded in many rural parts of Pune district

While the risk from Cyclone Nisarga to Pune district may be relatively low as compared to Mumbai city and districts in the Konkan division, a number of tehsils in the district’s rural parts have been placed on ‘high alert’, said authorities on Tuesday.

Ayush Prasad, Chief Executive Officer (CEO), Pune Zilla Parishad, said that immediate preventive measures were being taken to ensure that there was no loss to life and minimal damage to property.

The National Disaster Response Force (NDRF) on Tuesday increased the number of its personnel pressed into service to deal with any emergency situations that might come up during the Cyclone Nisarga predicted by the India Meteorological Department. The Mumbai Police, meanwhile, issued fresh prohibitory orders forbidding any assembly at promenades and beaches in the city.

The Mumbai Divisions of the Western Railways (WR) and Central Railways (CR) have taken a series of precautions in the city in light of the approaching cyclone Nisarga. While no trains have been cancelled as yet, railway officials said that they were monitoring the situation closely and would take call on regulating or short terminating trains if the need arose. The railways on Monday had partially resumed timetabled long distance services to several parts of the country with many trains either starting from Mumbai or being routed via the larger Mumbai Metropolitan Region.

The Department of Telecommunications (DoT) has taken stock of the readiness and arrangements made by telecom companies for ensuring network connectivity in Maharashtra and Gujarat, ahead of cyclone Nisarga.

“All our infratructure provider (IP) members have taken necessary steps to ensure connectivity 24/7 in the areas which are likely to be affected by the cyclone and all the background arrangements like additional DG sets, battery banks, spare parts, stocking of diesel are taken care of,” T.R. Dua, Director-General, Tower and Infrastructure Providers Association (TAIPA), said in a statement.

GVK MIAL managed Chhatrapati Shivaji Maharaj International Airport (CSMIA) will operate a total of 19 flights on June 3 in wake of cyclone Nisarga that is expected to make landfall near Mumbai.

The curtailed schedule will include 11 departures and 8 arrivals. The flights will be operated by 5 airlines which include Air Asia India, Air India, IndiGo, GoAir and SpiceJet.

We are prepared: Maharashtra CM

Chief Minister Uddhav Thackeray on Tuesday, in a televised address, said, “We can only pray that its intensity decreases by the time it reaches us. But we are prepared. We have contacted all fisherfolk in the State and are bringing them back home.” There were some from Palghar with whom we were unable to get in touch with earlier in the day, but we have now reached them as well. They won’t be allowed to venture out into the sea for the next two days.”

With Cyclone Nisarga brewing in the Arabian Sea, the Western Naval Command has put its teams on alert and mobilised adequate resources for flood relief, rescue and diving assistance in the event of heavy rainfall in urban and rural areas.

The Western Naval Command is coordinating with State governments on the western seaboard. It has loaded ships of the Western Fleet with humanitarian assistance and disaster relief bricks to provide relief to coastal areas likely to receive heavy rain.

Wed Jun 3 , 2020
The elephant had moved to a water source after it got injured, said forest department officials THRISSUR: Forest department began a probe after the carcass of a pregnant wild elephant was found in Velliyar River under Mannarkkad forest division on May 27. Officials said that some miscreant had given a […]