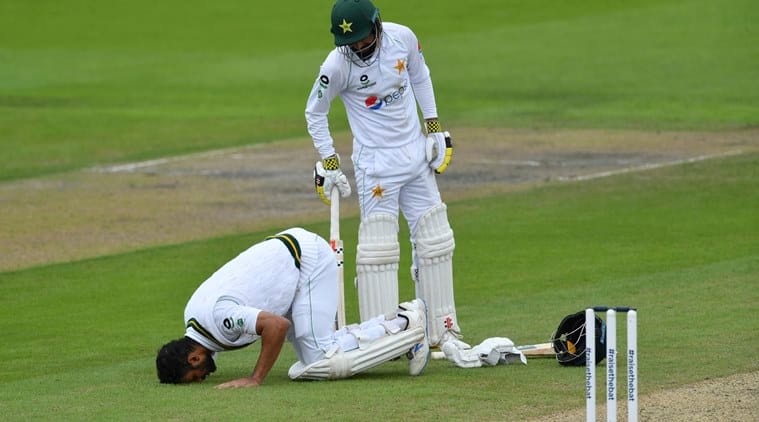 Shan Masood, left, celebrates after scoring a century during the second day of the first Test in Manchester. (AP Photo)

It followed his previous career-best 135 against Sri Lanka in December in Karachi and 100 against Bangladesh in February in Rawalpindi.

With this feat, Masood joins a league of legends, all of whom have achieved the same record– Zaheer Abbas, Mudassar Nazar, Mohammad Yousaf, Younis Khan, and Misbah-ul- Haq.

With this hundred, Masood also becomes the first Pakistani opener to reach three-figures since former opener Saeed Anwar in 1996.

As shown in this @CricViz graphic, one way that Shan Masood has improved his performance has been by leaving the ball much more. In 2016, he left just 3% of the balls bowled to him in the channel; this Test, that’s risen to 20%. #ENGvPAK pic.twitter.com/zxBjKNWH8B

Just love the organizational skills of Shan Masood this innings. Great judgment in playing adequately forward or back to the length.

In his patient knock, Shan Masood faced 319 deliveries- the last time an overseas opener faced more balls in a Test in England, was when Murali Vijay faced 361 balls back in 2014.