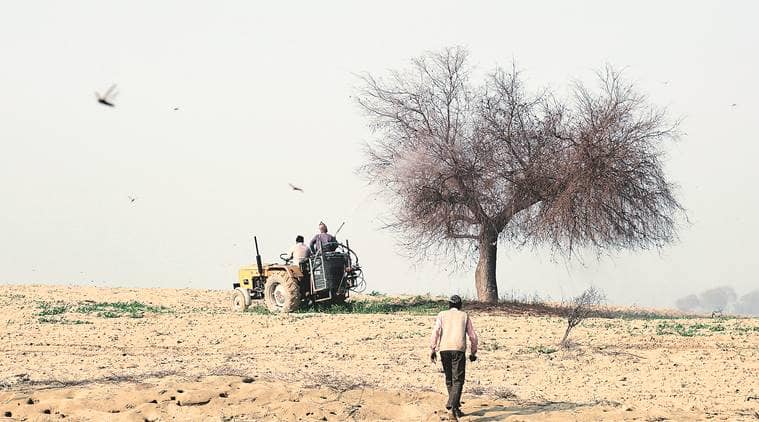 The first swarm of locusts was spotted in Punjab’s border villages Sunday night, not long after the pests destroyed crops in Rajasthan and Gujarat.

The swarm was seen in Bareka and Rupnagar villages of Fazilka district in a 3 km area. Farm land in these areas was sprayed for nine hours, starting Sunday night and continuing till the early hours of Monday. Agriculture officials claimed that the swarm was killed and the situation was under control.

A week ago, swarms of locusts, locally known as ‘tiddi dal’, had been spotted in around two dozen villages close to the Rajasthan border of Fazilka, Bathinda and Muktsar districts of Punjab. The department had then claimed that these were solitary groups that couldn’t do any harm, but had officials swing into action.

Bareka and Rupnagar villages — where locusts were spotted on Sunday night — fall in Khuiasarwar block of Fazilka. A week ago, small groups of locusts had been spotted in Kallar Khera and Gumjal, the last villages of Punjab along the Rajasthan border. However, Bareka and Rupnagar are 30 km away from the last villages of Punjab. Teams from Ludhiana’s Punjab Agriculture University, Chandigarh, had also arrived at the affected villages where spraying started Sunday night itself.
Swatanter Kumar, director, agriculture, Punjab, said, “Spray work started at about 9.30 pm Sunday and continued till 2.30 am. The swarm had sat on the trees. It came from Pakistan’s side as per the wind direction. In the morning hours (of Monday), our teams did spray work from 6 am to 10 pm and controlled the swarm here itself. All the locusts were killed.”

Manjeet Singh, chief agriculture officer, Fazilka, said, “During night hours, they rest on trees and sit on tender leafy crops in the morning hours when the sun is up. They damage crops in the daytime. However, we have killed all the locusts. We expect that the situation has been controlled here itself.”

Kumar said four teams — from Fazilka, Abohar, Muktsar and Faridkot — had been formed to control the swarm.

Tue Jun 9 , 2020
JAIPUR: A special campaign will be launched in the state from June 21 to 30 to spread awareness about Covid-19. In this ten-day special campaign, people will be made aware of the dangers of Covid-19 through various means. A decision was taken in the review meeting held through video conference […]