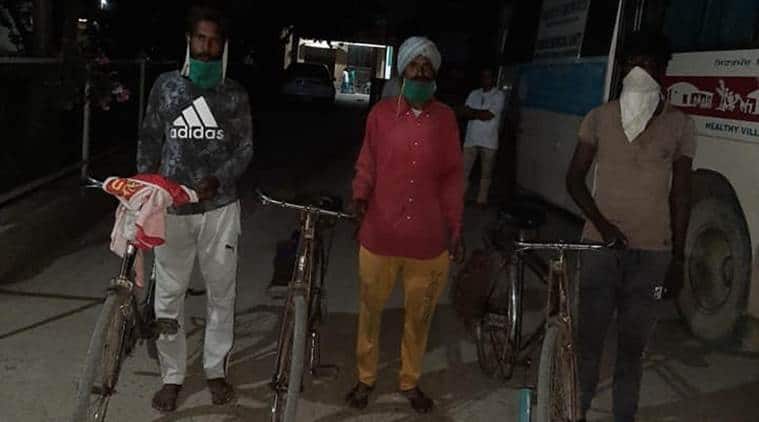 The three, who work as combine operators, had gone to Madhya Pradesh from Punjab for wheat harvesting in the first week of March. But with the lockdown in place, the trains stopped and there was no way for them to return. (Express Photo)

The soles of their feet cracked due to continuous pedaling, three agriculture workers felt they would faint any minute as they reached the Community Health Centre in Daroli Bhai of Moga Saturday night.

Angrej Singh (32), Jaspal Singh (50) and Beant Singh (20), who had traveled nearly 1,500 km in 14 days on their second-hand bicycles from Hoshangabad of Madhya Pradesh, asked the doctors to quarantine them and take their samples to test for the coronavirus. They resolved not to go to their homes in Rattian village or meet their families till they complete the quarantine period.

The three, who work as combine operators, had gone to Madhya Pradesh from Punjab for wheat harvesting in the first week of March. But with the lockdown in place, the trains stopped and there was no way for them to return.

The three were left with no other option but to buy second-handle bicycles and they started pedaling back home on the evening of April 18. Passing through the jungles along the Rajasthan-MP border, the mountainous and rocky terrain of Rajasthan, then Haryana and finally entering Punjab border, they slept on the roadside or in closed dhabas. They would eat every 2-3 days, and spent around Rs 6,000 on cycle repairs, sewed tattered slippers with wires. They stopped at some places where some people including policemen served them food, while a shepherd gave them some milk to make tea.

Wherever the bicycles would give up in the mountains of Rajasthan, they would walk. They would hoist the bicycles onto their shoulders wherever there would be water bodies. Twice Rajasthan police stopped and asked them to take a U-turn, and they were forced to spend a day in the jungle to take a shortcut. Thorny bushes pierced their feet and left their cycles punctured, but they continued.

They said they would wash hands wherever they would find water. Finally on reaching Punjab, they informed their families and called the village sarpanch but did not go home. Instead they reached CHC to quarantine themselves.

Now quarantined at a government facility in Moga, Angrej Singh told The Indian Express that their journey gave them a glimpse of both the good and ugly sides of humanity as they crossed four states. “We reached MP on March 3 like every year, to work as combine/reaper operators in wheat fields. We three earned Rs 25,000 each but our journey back home to Punjab has cost us Rs 12,000. We had to purchase two second-hand bicycles for Rs 1,000 and Rs 1,200 each and the third cycle we borrowed from our employer. Then Rs 4,000 were spent on initial repairs of those cycles when we started from there on April 18. On the way, hotels/dhabas would refuse to serve us food and those who would, would charge Rs 600 for plain dal and roti.”

He said that they had started with two packets of biscuits, tea leaves, sugar and a pan to make tea, and an air-pump to refill tyres of cycles and Rs 35,000 in cash which they had earned. “Poori zindagi kadey ni bhulna assi oh jungle wala din (We won’t forget the day spent in a jungle our whole life). We were lost and it took an entire day to find our way back to the highway,” he said.

The three said they tried to contact Sangrur MP Bhagwant Mann of AAP for help but got no response. “Someone would pick his phone and say that they are in touch with government to solve the problem but he did not help. Then we stopped calling him and decided to start on our cycles. Like us, many other workers from Punjab and stuck in MP and they have no transport to return. MP government has made no arrangements,” said Angrej Singh.

As they reached the Punjab-Haryana border (Shambhu barrier) on May 1, police checked their temperatures. “They offered us an ambulance but we promised them that we won’t go to our homes. We gave them our numbers. We started cycling again. As we pedaled towards our village Rattian, our family and sarpanch came almost 2 km ahead of the village entrance to take our luggage but we did not enter the village. We straightway went to CHC Daroli Bhai. Our samples were collected today,” said Angrej Singh.

Of the Rs 25,000 they earned working in MP, they don’t know how much is left. “We haven’t yet counted, but finally we have reached home. Punjab Police also served us lassi and we realized we were home. Pair dharti te lag hi nahi rahe si dard maare par hun theek hai (It hurts when our feet touch the ground, but we are better now),” said Angrej Singh.

Tue Jun 2 , 2020
An uprooted electric pole after rain & hailstorm in Jaisalmer on Monday JAISALMER: Rain accompanied with hail hit many areas in Jaisalmer and Barmer districts due to western disturbance that started on Sunday and continued till Monday. Normal life was thrown out of gear as rain filled many rivulets, ponds […]