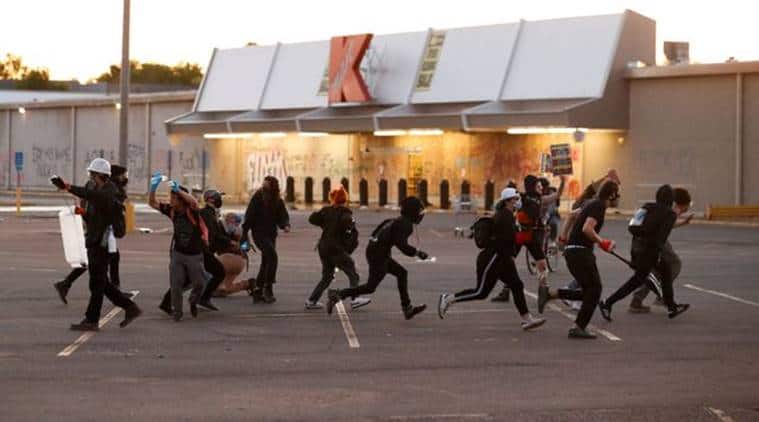 Demonstrators run during a protest against the death in Minneapolis police custody of George Floyd, in Minneapolis, Minnesota, U.S., May 30, 2020. REUTERS/Lucas Jackson

As protests continue to intensify across the United States five days after George Floyd died in police custody in Minneapolis, videos have now surfaced on social media in which two New York Police Department (NYPD) vehicles are seen hurtling into crowds of demonstrators who had gathered on the streets of Brooklyn.

Read| Explained: Why George Floyd’s death has sparked violent protests in the US

In several video clips, protesters are seen pressing a metal barricade against the front of an NYPD SUV and pelting it with bottles and traffic cones. A second NYPD vehicle is then seen driving around the barricade and into the crowd of protesters. The driver of the first police vehicle appears to suddenly accelerate and ram into the protesters behind the barricade. While some were knocked to the ground, there have been no reports of severe injuries sustained by any of the protesters at the site of the incident.

Tensions flared in New York on Saturday as thousands gathered across the city to protest against the killing of 46-year-old African American George Floyd, who died on Monday after being pinned to the ground and suffocated by a Minneapolis police official. Violent clashes between police and protesters broke out in several parts of the city and over 200 people were arrested, US broadcaster CBS reported on Sunday. As many as 15 police vehicles were set ablaze in Manhattan and Brooklyn, NYPD officials have said.

“It is by the grace of God that we don’t have dead officers today,” NYPD Police Commissioner Dermot Shea said in a press briefing on Saturday. Shea alleged that a protestor had been arrested and could be facing murder charges for throwing a molotov cocktail (a glass bottle filled with flammable liquid) into a police vehicle. Meanwhile, Mayor Bill De Blasio has appealed to the people of New York to help restore peace and order.

Derek Chauvin, the former Minneapolis police officer behind Floyd’s death, was arrested and charged with third-degree murder and second-degree manslaughter on Friday. Curfews have been imposed and National guard soldiers were deployed in several cities, as violent protests continues to spread across the US.