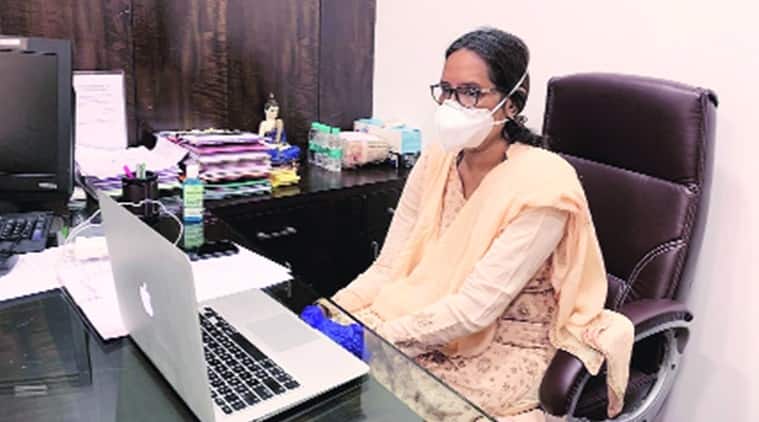 Varsha Gaikwad told The Indian Express that the use of national television to school children will make remote learning more accessible. (File)

Maharashtra wants the Centre to allot it 12-hour daily air time on national television for broadcasting school lessons. It has also sought a two-hour slot on All India Radio (AIR) for coaching students.

In an official letter to the Union Information to the Information and Broadcasting Ministry on Thursday, state’s School Education Minister Varsha Gaikwad wrote, “The State Council of Educational Research and Training (SCERT), Maharashtra, has already accumulated 1,000 plus hours of digital learning and interactive content from primary to secondary classes. During the course of the upcoming academic year, we wish to broadcast 12 hours of daily education content through two channels that come under the Doordarshan (DD) Channel family and two hours of daily content on All Indian Radio (AIR).”

Gaikwad told The Indian Express that the use of national television to school children will make remote learning more accessible.

While the prolonged lockdown has forced schools and tutors to go virtual, concerns have prevailed regarding the loss of school time and the continuity of education for the underprivileged children who do not have access to smartphones and the internet.

“Online classes require a decent system or a smartphone and a good internet facility, all of which come at a cost. Students from poorer backgrounds in rural and tribal belts may not be able to afford it. We are keen to ensure that the continuity of education for each and every student enrolled with us,” she said.

At the epicentre of coronavirus infections, Maharashtra has, so far, seen 59,546 positive cases and 1,982 deaths.

A senior education department official said, “Most households have a television. The DD National has a family of 16 channels that are free-to-air on all platforms. We feel that utilising it to impart school lessons will prove extremely beneficial to the student community in these difficult times.”

As per the latest statistics, Maharashtra’s 1.13 lakh schools, including 84,590 in rural and tribal belts, collectively account for 25 crore students. Of these, 1.18 crore students are enrolled in the rural and tribal schools. According to officials, the move to use national television for remote learning is also aimed at students from migrant families who have returned to their native villages amid the pandemic.

Highlighting that not everyone who has gone to their native place will return immediately, Gaikwad said, “The use of national television to impart lessons will help connect with students who cannot be accommodated in schools in their respective areas.”

The state, which has plans to use a mix of live, pre-recorded, and edutainment programmes on television, has further sought permission for broadcasting live lessons in mock classroom settings. “We have planned virtual classroom studies. It will be of great help to the students if you also allow us to broadcast live,” Gaikwad stated in the letter.

A senior state education department official said that the live broadcasts were mainly being planned for higher secondary classes.

While institutions are trying to adapt to online means of teaching, the minister also pointed out that some of them may find it difficult to quickly switch to online teaching. A section of activists in the education stream has also aired concerns regarding the impact spending long hours online would have on the children.

The Union Ministry of Human Resources Development had earlier offered to coordinate with the Information and Broadcasting Ministry to facilitate the provision of time slots to states for school children through national television. Gaikwad’s letter has also been copied to the HRD minister.

Sources said that the state had plans to reserve dedicated time slots for showing lessons from primary to secondary classes. It has already appointed the SCERT to aggregate digital learning content grade-wise. “Digital content in multiple languages is being aggregated for all classes,” sources said.

Exploring various ways to support student learning amid the pandemic, the state government has been using DIKSHA, a free android app developed by the Centre for students and teachers, to promote e-learning. Recognised by the HRD ministry as a “champion” state in DIKSHA learning, Maharashtra has, so far, made 29,599 pieces of e-learning content, including textbooks, videos, animation, and power-point presentations, from Classes I to X available on this app.