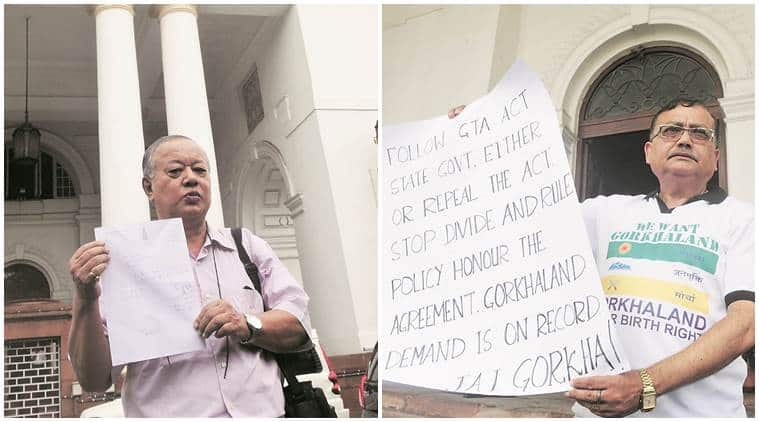 THREE DAYS after the Kalimpong MLA quit the Gorkha Janmukti Morcha (GJM), another legislator, Trilok Dewan, on Monday resigned from the party describing its top leadership as “autocratic”, He, along with the third GJM MLA, also resigned from the state Assembly.

While Dewan, the MLA from Darjeeling constituency, resigned from his seat in the Assembly as well as from the party, Kurseong MLA Rohit Sharma resigned from the Assembly, giving a huge jolt to the organisation which for long spearheaded a movement for the creation of a separate Gorkhaland state in the Darjeeling hills.

The GJM had earlier announced that its three MLAs would resign from the Assembly to protest against the alleged non-cooperation of the state government with the Gorkhaland Territorial Administration (GTA).

But Harka Bahadur Chetri, GJM MLA from Kalimpong, had refused to toe the party line and announced on September 18 that he was quitting the party. He did not resign from the Assembly but said will function as an Independent MLA.

While claiming that he was quitting the party due to “autocratic” attitude of the GJM leadership, Chetri had said he won’t join the ruling Trinamool Congress.

Dewan on Monday submitted his resignation to Speaker Biman Banerjee in his chamber. Later, the Speaker told the House that the resignation has been accepted.

Speaking to mediapersons, Dewan said: “I am not only the MLA but also the principal advisor (to the party chief)… but the party chief never bothered to take me into confidence before taking drastic steps. It is an insult.”
He, however, brushed aside any possibility of him joining the Trinamool Congress.

Sharma, meanwhile, attended the morning session of the House. He rose from his seat holding a placard and said he was resigning due to excessive interference of the West Bengal government in the affairs of GTA. He alleged that GTA was not being allowed to function properly by the state government, which, he said, was also not listening to the voice of the people of the hills.

When Sharma was approaching the Speaker’s chair to submit his papers, he was told to give them in Banerjee’s chamber.

Sharma later told mediapersons that the state government was dividing the Gorkha community by forming boards for Lepchas, Bhutias and Sherpas.

“The state government is constantly meddling into the affairs of GTA, hampering its smooth functioning,” he said while adding that his party will not deviate from the demand of a separate Gorkhaland, which was a part of the GTA pact signed in 2011.

Sun May 31 , 2020
Written by Aniruddha Ghosal | Kolkata | Published: September 22, 2015 1:10:57 am At Kolkata Police Museum where Netaji files are displayed. (Express Photo) THE NETAJI files declassified by the Mamata government recently tell the story of not just Subhas Chandra Bose’s rise, but also the slow disintegration of his […]