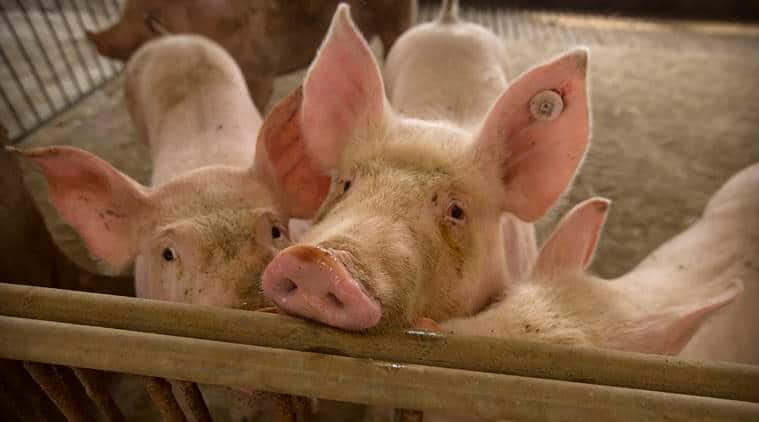 Punjab has been given the right to keep 50 per cent of the first batch of the offspring, with an estimated worth of Rs 15 crore. Officials said that male piglets will be further used for local breed improvement in state. (Representational)

Three expert committees to monitor their feed, health and breeding, showers twice a day, a team of two officers and nine class-4 employees to monitor their movement 24×7, a dedicated team to ensure strict biosecurity – that’s how Punjab’s animal husbandry department is pampering 248 exotic pigs imported from the United Kingdom (UK) and kept at its farm in Nabha of Patiala.

The pigs were to be originally sent to the North East states, but the plan got derailed with the African Swine Fever (ASF) outbreak in the Seven Sisters. The disease, which has led to the death and culling of millions of pigs across the Asian and African countries with China among the worst affected countries, surprisingly came as a blessing in disguise for Punjab, which has been entrusted with the responsibility of being the ‘custodian and caretaker’ of the animals imported under the National Livestock Mission (NLM) by the Union ministry of animal husbandry, dairying and fisheries. The pigs will stay in Punjab, for at least next six months, till the African Swine Fever outbreak isn’t controlled in the North-east.

Here’s how the move has come as ‘jackpot’ for the animal husbandry department in Punjab.

With 179 of the total 248 pigs being sows (females), it is expected that they will deliver at least 1,800 piglets (each sow on an average delivers 10-12 piglets). Punjab has been given the right to keep 50 per cent of the first batch of the offspring, with an estimated worth of Rs 15 crore. Officials said that male piglets will be further used for local breed improvement in state. Once they gain adulthood, their semen will also be used for artificial insemination, which will further multiply profits for Punjab.

The animals are of three breeds: Hampshire (46 pigs, 123 sows), Landrace (7 pigs and 14 sows) and large white Yorkshire (16 pigs, 142 sows). Of this, the two breeds— Hampshire and Landrace – have arrived in Punjab for the first time. All animals are from 8 to 9 months of age, optimum for breeding.

Speaking to The Indian Express, Dr Inderjeet Singh, vice-chancellor, Guru Angad Dev Veterinary and Animal Sciences University (GADVASU) and former director, Punjab animal husbandry department, under whose tenure Punjab got the custody of the pigs, said that 900 piglets worth Rs 15 crore is the minimum benefit that Punjab will get after taking care of the animals for six months.

“Situation turned really bad in Assam and Arunachal Pradesh (after ASF outbreak) so it wasn’t safe to send them to the north-east. The Centre asked if Punjab can become their custodians till they reach their final destination and we readily agreed. Punjab is now having the right to keep 50 per cent of their first litter,” said Dr Singh.

Their worth has been reached at with an assumption that of 900 piglets, half would be males and rest females going by expected 50-50 ratio and calculation has been done at the price for which they have been purchased. “Each male has been purchased for Rs 2.5 lakh and female Rs 1 lakh and by that estimate, Punjab gets piglets worth Rs 15 crore. We will be spending around Rs 30-35 lakh over six months on pigs’ caretaking,” Dr Singh said, adding that since the state is not paying anything for original animals, the deal couldn’t have been any better.

He said that there was no plan to slaughter any of the piglets that Punjab will keep. “While females will be kept at our government farms, we will use males for improving local breeds. Some males will be given to farmers. We will not be slaughtering any of the animals”.

He added that there is committee of the experts in place to ensure that the sows give birth to healthy piglets.

Meanwhile, at the government’s farm in Nabha, the pigs are being pampered by the staff and experts on different duties. Unlike local breeds that mostly feed on garbage and survive on swampy filth and mud, these exotic animals are keeping officials and vets on their toes.

Three expert committees — a two-member feed and nutrition committee, a three-member breeding plan committee (with experts from GADVASU) and another three-member health and disease control committee — have been constituted to look after each aspect of their caretaking. The routine medical testing of the pigs is also being done by the Regional Disease Diagnostic Laboratory, Jalandhar.

Speaking to The Indian Express, Dr Vikas Kumar, one of the veterinary officers taking care of the pigs, said, “Our team is headed by the deputy director (piggery and poultry) and comprises and two veterinary officers, two veterinary inspectors, and nine class-4 employees and night guards, taking care of pigs 24×7. They are fed twice a day – each pig getting 2.5 kg ration, which includes maize, groundnut cakes, and soyabean. The feed comes from government farms only to ensure there is no adulteration. They are given bath twice a day. Fans, coolers and exhaust fans have been installed in each shed so that they do not feel the heat”.

There are very strict biosecurity arrangements to prevent exposure to any disease causing agent and visitors aren’t allowed. Disinfectants are also sprayed twice a day in the entire area. As part of daily health monitoring, the pigs have already been vaccinated for Foot & Mouth disease, swine fever and dewormed,” said Dr Kumar.

Dr Singh further said that all animals are young and their breeding process has already been started. “GADVASU is providing guidance in feeding, breeding and artificial insemination. The gestation period of pigs is 3 months, 3 weeks and 3 days (nearly 114 days). Their range of giving birth is 2-15 piglets but on an average it is 8-10 normally. The aim is to stop piggery inbreeding in Punjab and genetically improve local breeds by using progeny of these exotic breeds,” he said.

Dr Gurpal Singh Walia, director, animal husbandry Punjab said, “We hope that more farmers will adopt piggery in Punjab. They are still hesitant. We want to increase their income by providing them high-quality UK breeds.”

“More than 2,000 farmers in Punjab are into piggery and mostly go for fattening (raising pigs for slaughtering). There is very less demand for pork in Punjab so they sell to other states, mostly north-east. Some farmers are also into breeding and sell animals to other states,” said Dr Singh.

What is African Swine Fever

It is a fatal disease characterised by severe fatigue, fever, blood clots, skin discoloration, vomiting etc and animals dying within days. In India, the disease has widely spread in Assam, Arunachal Pradesh and other north-eastern states and mass culling of pigs is ordered. While official figures say that at least 3,000 pigs died in Assam due to AFS recently, local farmers have put the number at over 25,000. According to the reports, China lost upto 60 per cent of its pig population (at least a hundred million) to African Swine Fever from 2018 to 2020 with Shenyang becoming the first hotspot of virus outbreak in Asia.

Tue Jul 28 , 2020
Congress workers on Monday staged a protest in Haryana’s Panchkula against the Bhartiya Janata Party, accusing it of attempting to destabilise the government in Rajasthan. The protest was held on a call given by the All India Congress Committee under the ‘Save Democracy-Save Constitution’ crusade. Party workers, accompanied by MLA […]