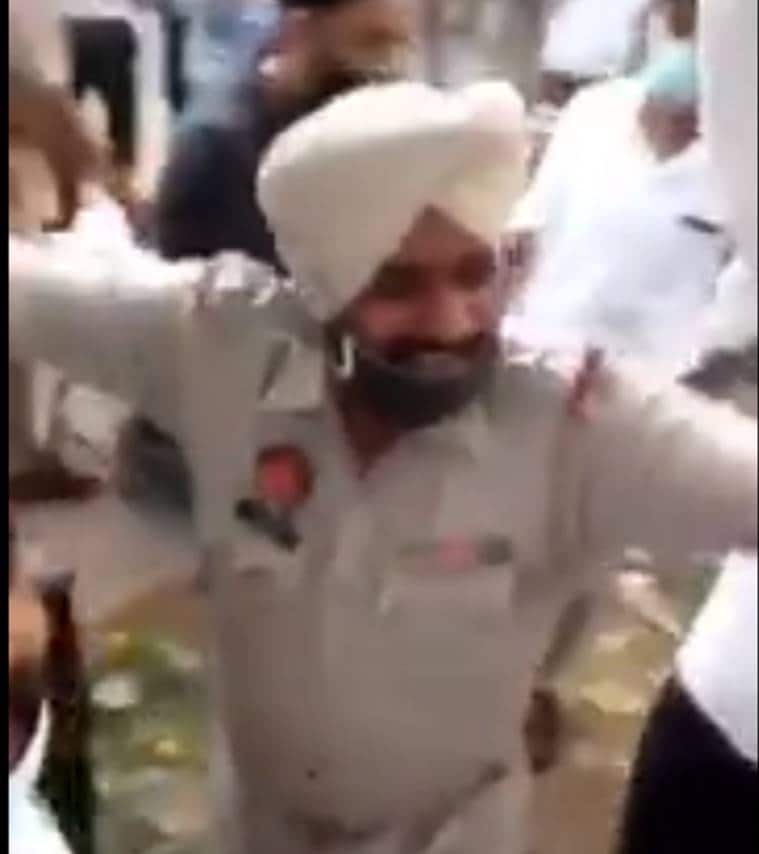 A widely shared video clip of the get-together had police personnel and authorised volunteers (who have been assisting police during lockdown) dancing to Punjabi pop music.

While people across the state are being told by cops to strictly follow social distancing rules, police officials inside Ludhaina’s Kotwali police station decided to break them without a care in the world during a “motivational get-together” held Monday.

A widely shared video clip of the get-together had police personnel and authorised volunteers (who have been assisting police during lockdown) dancing to Punjabi pop music. While some had their masks on, others had them hanging down from their faces as many hugged each other, clicked selfies while breaking into Bhangra moves.

Among those who attended it were Ludhiana Deputy Commissioner Pardeep Agarwal, city Police Commissioner Rakesh Agrawal, Additional DCP-1 Gurpreet Singh Sikand and ACP (Central) Waryam Singh. However, all these officials claimed that it was a ‘get-together’ which was organised to ‘motivate’ the force and it turned into a dance party after they had left the police station premises.

They, however, agreed that what happened was wrong and cops who turned it into a dance party, without following social distancing, were given a ‘strict warning’. Officials claimed that it was a ‘get-together’ which was organised to ‘motivate’ the force and it turned into a dance party after they had left the police station premises.

Additional DCP-1, Gupreet Singh Sikand, who was one of the attendees and under whom division number-1 police station works, said: “We had organised a get-together as force and volunteers were on continuous duty since the lockdown had started. All that was allowed was food and some chit-chat, but what happened after senior officers left, should not have happened. We saw the viral videos and social distancing was completely defied. After officers left, someone started music and dancing. It should not have happened. Some NGO leaders arrived there and started this music and party. A warning has been issued against repeating any such thing in the future.”

ACP (Central) Waryam Singh also said that though he had attended the get-together, the dance started after he had left. “Some cops and volunteers must have started it. It should not have happened. Our motive was just to organise a small get-together to motivate the force. Whatever happened later was wrong. All that we had allowed was food and everything else was done without permission later,” said the ACP.

Inspector Rajwant Singh, SHO division number 1 police station, said that he had only organised the event for his staff and volunteers. “At the maximum, 60 people should have been there. I have no idea how at least a hundred more people reached police station and started music and dancing. We had invited DC and CP sir to participate and motivate the force. It happened after they left…”

Contacted for comments, Rakesh Agrawal, Ludhiana police commissioner said that he had attended the “motivational get-together for a few minutes”. He, however, refused to comment further on the viral videos shot in police station premises.