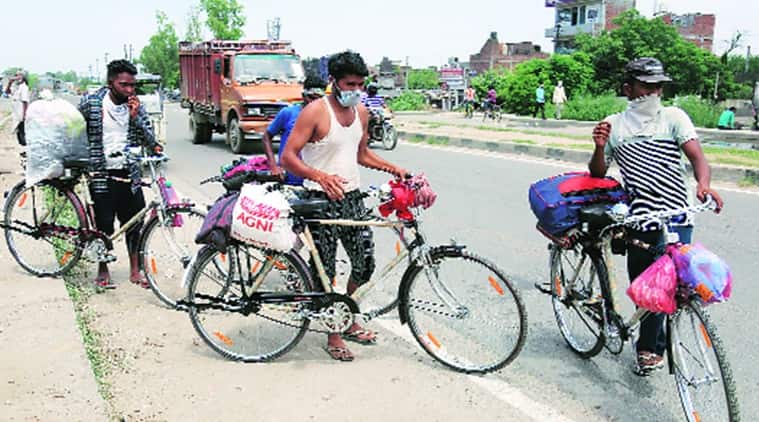 Migrants who purchased bicycles to travel back to their native place Moradabad in Uttar Pradesh, resume their journey after a short break in Ludhiana on Sunday. Express photo: Gurmeet Singh

Rajesh Bansal, who opened his cycle frame manufacturing unit, Rana Industries, on Friday, morning said: “I had 15 workers employed with me before lockdown and Thursday when I opened, 8 turned up. It is ok with me as of now. I can manage with them. Friday went in cleaning of machinery and office. On Saturday, few pending works are being cleared. I have inventory of 15 days as of now with me.”

Sunil Kumar, of Metros Industries located in Muradpura, has a house on top floor and a small unit on the ground floor.

The unit employs seven workers, out of which five are back. Kumar said,”I make washlets for bicycle and during lockdown, I was maintaining my unit as I live upstairs. But work has started now. Friday, tried working wearing masks. It will take us time to adjust to this. I have no orders as of now as big units are yet to fire up.”

With an eye over power bills and tax revenue of this industrial hub, Punjab has opened industry in mixed land use areas now. In designated areas under master plan, permission was given earlier.

“Supply chain could not be completed and hence they need to be opened,” said Gurmeet Singh Kular, president of Federation of Industrial and Commercial Organisation (FICO).

With this, 100 per cent of the industry in the state has been allowed to open by Punjab government in Ludhiana, which comprises of 95,202 units — 36.6 per cent of the total industrial units of Punjab.

Out of the total, there are around 14,000 bicycle units in Ludhiana that employ around 4 lakh people. Bicycle industry has annual turnover Rs 6,900 crore out of which Rs 5,500 crores is related to domestic sales.

“Our industry on a daily basis makes 55,000 bicycles, but things will not be the same for some time to come. We are still struggling to just re-start our units, production is a distant issue for us,” said Kular.

Onkar Singh, MD, Avon Cycles, said,”We are apprehending an increase in demand of bicycles as Chinese import is bare minimum. Moreover, thousands of workers are walking by foot on roads, thus government can at least given them a bicycle which they cannot own till now. This can give a boost to bicycle industry as well. Moreover, we feel that social distancing is going to stay and hence people may switch to bicycles for short distances, instead of auto or local bus.”

Ludhiana’s bicycle industry would import, parts and bicycles, worth Rs 17,00 crores every year from China. DS Chawla, president of United Cycles Parts and Manufacturers Association, said: “This figure will decrease drastically this year, but will not be zero, because for many parts now China is the only answer. When we are ordering medical equipments from China, why can’t we import parts from China like before. Of course, we are tapping new markets now…”

On Saturday, 11 migrants who had to go to Bihar purchased brand new bicycles from Faridkot. Each bicycle cost Rs 4,000.

After reaching from Kotakapura (in Faridkot) to Barnala in 6 hours, one among them, Mukesh Yadav, said: “We came in March, and were working in steel factory on daily wages. As work stopped, we had no choice but to go back. Our families sent us money with which we purchased bicycles because our turn via train is not coming till now. However, all of them were stopped by Barnala DC TPS Phoolka and were sent in a shelter home..they will be sent via trains now,” said the DC.