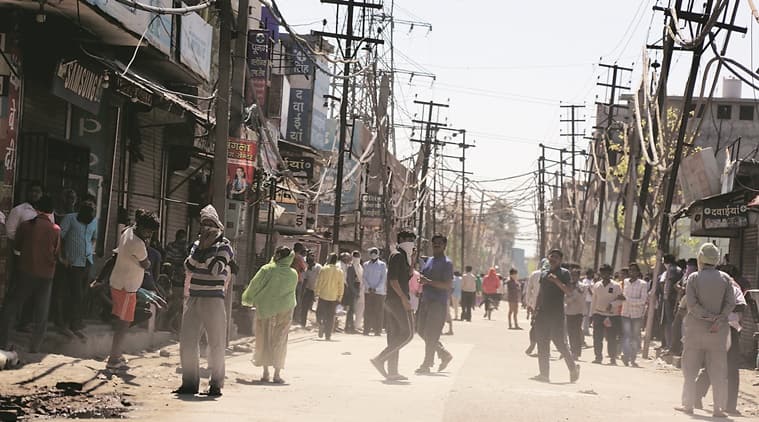 Industrial associations of Ludhiana on Monday expressed their inability to pay wages at a time when their factories were closed. (File Photo by Gurmeet Singh)

REACTING TO a fresh notification of the Punjab government asking the industry to pay full wages to workers during the lockdown period, various industrial associations of Ludhiana on Monday had a meeting with DC Pardeep Aggarwal, where they expressed their inability to pay wages at a time when their factories were closed.

On April 12, the Ludhiana DC had issued orders to the industrial sector to pay full wages to workers on fixed dates.

“We have expressed inability to pay full wages during the lockdown period, rather we can give Rs 2,500 a month as advance for the closure period. This amount will be adjusted as advance to their salaries. This advance can be paid in the form of groceries as well,” said Badish Jindal, national president, All Industries and Trade Forum. At earlier in a meeting with Ludhiana Police Commissioner Rakesh Aggarwal, it was worked out that subsistence allowance will be paid to workers as Rs 2,500 per month during the lockdown period, but the fresh notification created furor among the industrial circle.

“We are eating simple dal roti and not doing any other expenditure. We are providing the same dal roti to our workers. Already their one month room rent has been freezed for the time being, we are providing for their day to day needs. From where are we going to get the money to pay them when our units are closed?” asked Charanjeet Singh Vishvkarma, former president, United Cycles Parts and Manufacturers Association (UCPMA).

Ajit Lakra, president of Ludhiana Knitters Association, has also written to Prime Minister Narendra Modi saying, “We are being threatened to pay full wages of workers during the lockdown period, but how? We need to know the mantra of earning during the lockdown. Interests on EMIs have not been deferred, rather we need to pay compound interest if we don’t pay EMIs for three months. Our power bills are outstanding. We need to know why employees state insurance fund is not being used to pay salaries of workers during lockdown. Where are those funds? Instead of giving any relief to industry, we are being troubled.”

Jindal said, “Industries pay Rs 25 per month as labour welfare fund for the registered labour of their factory workers and Rs 1.7 lakh crore worth funds are lying with various state governments. So even this fund needs to be used to pay workers, thus easing the burden on industry.”

Rajesh Bansal, a bicycle manufacturer, said, “I heard Punjab Finance Minister Manpreet Badal’s statement to a TV channel in which he said that the state has no funds as they are not getting taxes from excise, fuel, GST etc. Hence they are finding it difficult to run the system. Hence if a state is not able to run due to less than a month’s tax losses, how can they expect industry to pay wages from own pocket and apart from that pay EMIs, power bills etc. as well?”

Industrial associations said they have cordial relations with workers and will take care of their basic needs but under no conditions will they be able to pay their full wages unless some relief package comes from the government’s side.