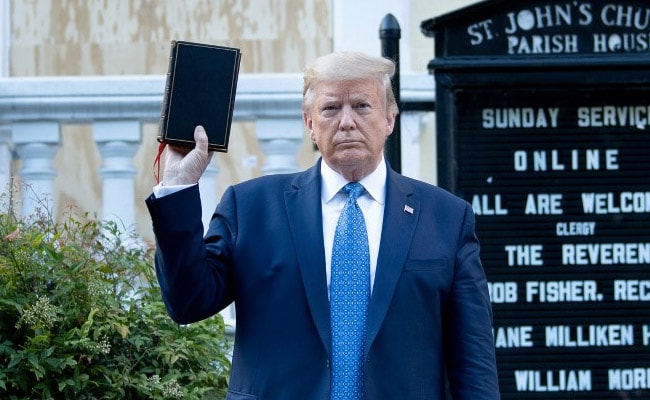 “We have a great country,” Donald Trump declared just outside the church, where he held up a Bible.

US President Donald Trump spurred fresh outrage Monday after police used tear gas to clear protesters from outside the White House so he could pose for photographs at a nearby church damaged during civil unrest.

The move earned him a sharp rebuke from the city mayor, the Episcopal bishop, and leading Democrats including former vice president Joe Biden, who decried the use of force merely “for a photo.”

Trump’s visit to the historic St John’s Church, across the street from the White House came after he delivered an address denouncing vandalism that has followed anti-racism protests that have gripped the country for a week.

As he spoke, law enforcement — including military police — could be seen firing tear gas to clear peaceful protesters in Lafayette Park, outside the White House, so the president could walk over to the church.

Known as “the Church of the Presidents,” St. John’s was sprayed with graffiti and partially damaged by fire during unrest on Sunday.

“We have a great country,” Trump declared just outside the Episcopal church, where he held up a Bible. He did not answer questions from reporters before leaving again.

The backlash was swift.

Biden, the presumptive Democratic presidential candidate in the November election, slammed Trump for “using the American military against the American people,” after the president vowed to order an army crackdown on the sweeping civil unrest.

“He tear-gassed peaceful protesters and fired rubber bullets. For a photo,” Biden tweeted late Monday. “For our children, for the very soul of our country, we must defeat him.”

Biden also announced he would speak Tuesday in Philadelphia “on the civil unrest facing communities across America.”

“I imposed a curfew at 7pm,” she tweeted.

“A full 25 minutes before the curfew & w/o provocation, federal police used munitions on peaceful protestors in front of the White House, an act that will make the job of @DCPoliceDept officers more difficult.”

“What the president did today was he called out the American military against American citizens,” Cuomo tweeted.

“He used the military to push out a peaceful protest so he could have a photo op at a church. It’s all just a reality TV show for this president.”

The president did not seek permission for the visit, she told CNN, condemning his use of a Bible, failure to pray, failure to acknowledge the agony of Americans and decision to use tear gas on protesters to make the visit.

“I am outraged… we distance ourselves from the incendiary language of this president,” she said.

“I just can’t believe what my eyes have seen tonight… I had no idea,” she added.