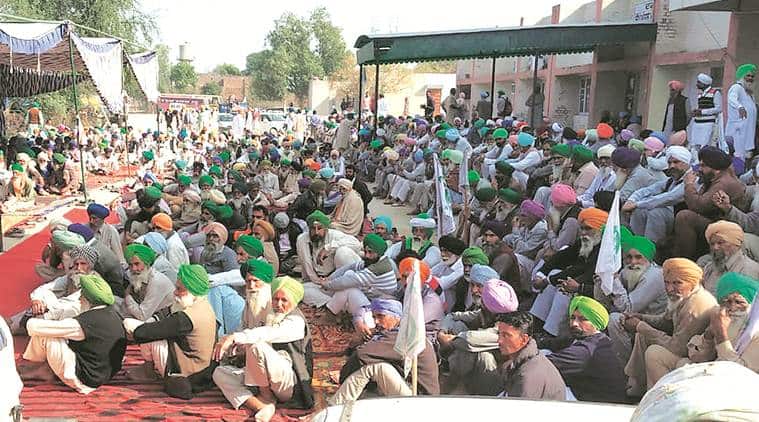 The farmers’ dharna at Jaitu in Faridkot. (Express photo by Gurmeet Singh)

A DAY after a farmer from Bathinda allegedly committed suicide by consuming poison during an ongoing protest in Faridkot demanding quashing of FIRs against stubble burning, the Bharti Kisan Union (Sidhupur) on Sunday said the body will not be cremated till the family is given Rs 20 lakh compensation and a job, and all such FIRs are revoked.

On Saturday morning, Jagseer Singh Jagga (52), allegedly consumed a poison liquid while sitting at a dharna organised by BKU(Sidhpur) outside the Jaitu sub-divisional magistrate’s office in Faridkot district. He was rushed to a hospital but declared dead on arrival, farmer union leaders said.

Faridkot SSP Manjeet Singh Dhessi could not be reached for comment on the incident.

“Today is the 32nd day of this indefinite day-night dharna and authorities have not yet moved on this issue. On Saturday, one of our members committed suicide. His body has been kept in the mortuary of the civil hospital and will be cremated only when Rs 20 lakh compensation, job to a family member and quashing of all FIRs is done as our member laid down his life for this struggle,” Jagjit Singh Dallewal, state president of BKU (Sidhupur), told The Indian Express.

Dallewal further said, “The Faridkot SSP and DC have called us for several meetings, but none have reached any conclusion.”

Sukhmander Singh Dhilwan, president of the Faridkot unit of their farmer union, said, “The farmer in question was depressed due to the cold attitude of the authorities, as we have been sitting on dharna for more than a month. Hence he committed suicide.”

“We did not realise what he was consuming and when we reached him, he only told us to continue this struggle. He was an active union member and debt took his life,” he added.

Maghar Singh, a cousin of the deceased, said, “We are yet to find out whether he had a pending loan or not. No FIR regarding stubble burning had been lodged against him, but he was fighting to get the FIRs against other farmers quashed. He had financial constraints at home as well. He had 9 acres of land earlier, but now he had just 5 acres as he sold the rest to afford the marriages of his seven sisters and a daughter. He is survived by three sons, a daughter and his wife. He had seven sisters and hence because of losses in farming and increasing family expenditures, he was depressed.”

Gurvinder Singh, Jagseer’s son, said, “I can’t believe that my father is no more. He was in dharna for the past four days and used to go for dharnas earlier too. I had no idea that we will never meet him again. My father was an activist and hence used to fight more for people rather than thinking about himself.”

Many farmers who have been booked for stubble burning are part of the dharna. Mandeep Kaur, SDM, Jaitu, said, “We are holding a number of meetings with the farmer leaders. These meetings are being held by DC and SSP Faridkot. Yet another meeting is scheduled for Sunday evening and Monday morning. We are hopeful of getting the matter resolved soon.”

She further said, “On many demands, we are not on the same page with farmer unions. Hence we are trying to make them understand and get the dharna lifted.”

A total of 1,737 FIRs under section 181 of IPC for disobeying the orders of government officials have been lodged by police authorities against farmers for stubble burning. Apart from these, 266 magisterial complaints have been lodged under section 39 of the Air Act, 1981. In 23,269 cases, red entries have been made in revenue records of farmers for the same, which can act as a deterrent for getting any benefits from the Punjab government against various revenue-related schemes.

Seattle mayor to Trump: 'Go back to your bunker'

Fri Jun 12 , 2020
SEATTLE: Seattle’s mayor told Donald Trump to “Go back to your bunker” on Thursday, escalating a spat after the president threatened to intervene over a police-free autonomous zone protesters have set up in the western US city. The reference to a “bunker” was a nod to reports Trump was rushed […]