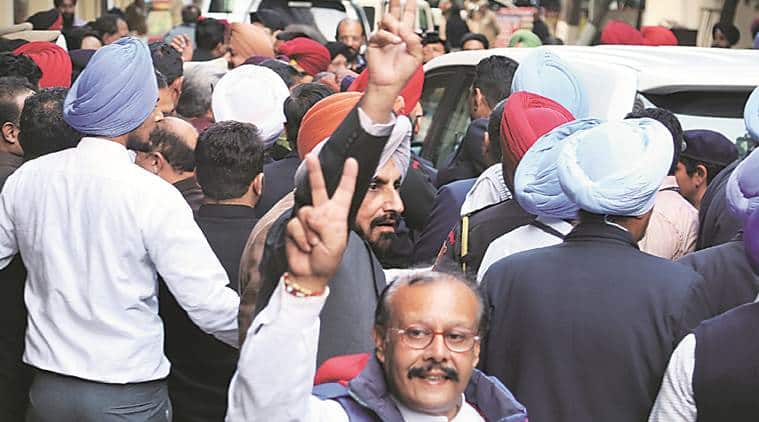 Congress leaders flash the victory sign after the court pronounced its verdict in the Ludhiana City Centre case, in Ludhiana on Wednesday. (Gurmeet Singh)

The Ludhiana court’s decision to discharge all accused, including representatives of real estate firm Today Homes, in the Ludhiana City Centre corruption case is likely to help and strengthen compensation claim of the realty firm against the Ludhiana Improvement Trust.

A senior advocate related to the case said, “Today’s verdict in which all accused including representatives of Today Homes have been discharged, is going to heavily facilitate and favour the private firm in Delhi High Court where they are fighting to get compensation from the LIT. Even if they deny to complete the project, they might get compensation in crores because trial court has discharged them and this verdict with strengthen their case.”

While Vigilance Bureau in its closure report before the Ludhaina court gave clean chit to the private firm representatives claiming that they did not do any fraud, the LIT in the other case before the Delhi High Court is fighting against compensation awarded to the firm saying that the “private firm is not innocent and committed a fraud”.

LIT assistant trust engineer Buta Ram told The Indian Express that in 2017, the sole arbitrator Justice R C Lahoti awarded compensation to the private company Today Homes and the same was challenged by LIT in a Ludhiana court. Later, the company too moved court in 2018 against the LIT. Now, both these petitions have been clubbed and moved to Delhi High Court on the orders of the Supreme Court (dated February 26, 2019).

“Today Homes won the compensation award and Justice Lahoti ordered that we (LIT) should pay them Rs 437 crore (if they continue the work) or Rs 251 crore (if they deny to complete the work) along with the interest amount since 2006. We challenged it in the court in 2017 and then the company also filed another plea when we refused to accept the award. On orders of SC, both petitions have been transferred to Delhi High Court from local court and now next date for hearing is December 13,” said Buta Ram.

He added: “In any case, the amount along with the interest crosses Rs 1,000 crore in case we have to compensate them, but we are fighting against it. We have pleaded that the company had committed a fraud and they are not innocent. They are even claiming the ownership of the 25-acre site land but we are opposing that too.”

Then Director Vigilance and ex-Punjab DGP Sumedh Singh Saini, in his application challenging VB’s closure report, had pointed out: ‘’The respondent state is arguing in favor of and in defence of the accused. An extraordinary situation has been created here.” He had also said that it was astonishing that government’s two bodies — the LIT and the Vigilance Bureau — were taking opposite stand in two courts on the role of Today Homes.

The trouble, meanwhile, is not entirely over for the accused in the case as two pleas challenging the closure report, and another by the Enforcement Directorate (ED) demanding chargesheet copy of the case to probe money laundering angle, are still pending in Punjab and Haryana High Court.

In another plea before the Punjab and Haryana HC, the ED is fighting to seek chargesheet copy of the case to probe money laundering allegations in the case for which it had filed separate FIR in 2013.

The plea by Bains and the ED are scheduled for hearing on December 2, 2019 and January 16, 2020, respectively. Earlier, four pleas challenging the closure report were all dismissed by the lower court.

The first plea was filed by Bains, the Lok Insaaf Party MLA on September 16, 2017, where he argued that “since it is a corruption case which is an offence against general public, I have the right to challenge closure report”. The application was dismissed on February 3, 2018 and the court said he had “no locus standi”.

Second challenge was by Sunil Kumar Dey, a Delhi-based architect: His application, filed application on November 3, 2017, on ground of sharing vital information was dismissed on February 3, 2018. The court said he had “no locus standi”.

Kanwarjit Singh Sandhu, former SSP Ludhiana Vigilance and the main investigating officer in the case, filed a plea on July 17, 2018 alleging that he was being threatened “to take a stand against his own investigation”, adding that he was “privy to certain facts”. But on August 30, 2018, the Ludhiana court ruled: “You are not the complainant, neither the informer, nor aggrieved so the application is dismissed”.

Former DGP Sumedh Singh Saini’s filed a plea challenging the closure report was dismissed on February 27, 2019. He had sought permission to submit in a “sealed envelope” to court some “sensitive material” related to the case. The court said: “The applicant (Saini) is neither an informant, nor an aggrieved. He was only supervising officer during investigation. The application is dismissed.”

Out of the four, only two — Saini and Bains — have moved the HC challenging the lower court’s decision to dismiss their pleas against the VB’s closure report.