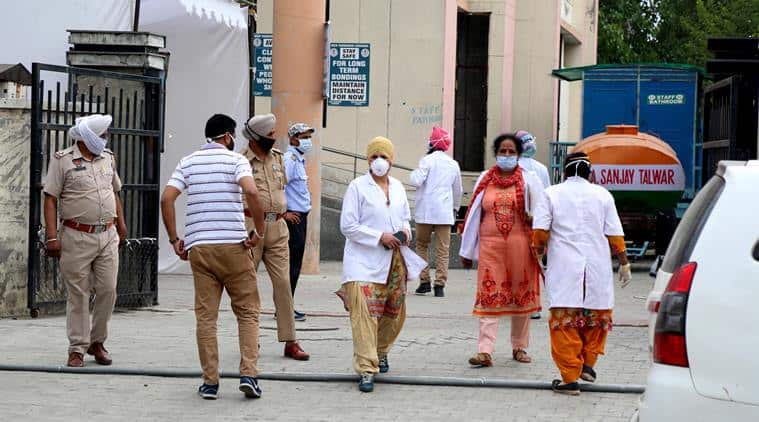 A 46-year-old diabetic assistant sub-inspector (ASI) from Ludhiana city police, who had tested positive for Coronavirus, has described his stay at two government hospitals — the Government Mother Child Hospital (MCH) on Chandigarh road (near Vardhman Mills) and Ludhiana Civil Hospital — as a “torturous” experience, alleging that he was grossly neglected by doctors and nurses and neither given proper food.

The ASI was then shifted from Government MCH to Ludhiana Civil Hospital, and later to the private SPS Hospital on Sunday.

The ASI — who was posted as the driver of sub-inspector SHO Basti Jodhewal (also infected, a direct contact of late ACP Anil Kohli) — was admitted in Government MCH Ludhiana on the night of April 17.

According to the administration and health department, MCH is an ‘isolation facility’ with a capacity of 120 beds for coronavirus patients as well as suspected cases.

Speaking to The Indian Express, the ASI said that when he reached MCH on the night of April 17, no doctor, nurse or hospital staffer checked him. “The next morning, I was not given breakfast. My cousin came with some fruits and tea, but hospital staff did not deliver that to my room. They were treating me like an untouchable, like I had committed a crime by testing positive.”

He further said, “For the whole day, despite being a diabetic, I was not given food. No doctor or nurse came to check me. In the evening too, my own police department colleague from the nearby Division no. 7 police station came with food for me from his home. The hospital staff did not deliver that too for hours. Finally, at around 11 pm on April 18, I had my first meal of the day. I kept requesting the staff that I am diabetic, so I need to have my meals on time, but there was no one to listen.”

‘No one was ready to come near me’

Late night on April 18, the ASI’s sugar levels shot up and he was shifted to the civil hospital. “There was no proper facility or any specialist doctor at MCH to check me properly. I was shifted to civil hospital late night and there too, no one checked my sugar levels. Again on April 19 morning, I was not given breakfast at the civil hospital and I called my friend to bring some food. At both government hospitals, no doctor or nurse was ready to come near me or even check temperature levels. The washrooms of the civil hospital were so unclean that few hours spent there were a torture that I cannot forget. At both government hospitals, I was neither given proper treatment nor food. My own police colleagues helped me. I finally complained to the seniors,” he said, adding, “One time that I was given food at MCH, they served me langar food which was stale. I refused to eat it.”

At around 2 pm on Sunday, the ASI was shifted to the private SPS Hospital after the intervention of Ludhiana police commissioner.

The complaint (a copy of which is with The Indian Express), written to the police commissioner reads: “…Hospital staff contacted division number 7 police station munshi and said that we should arrange food for our infected policeman on our own as they do not have any such facilities for patients. On April 18, a doctor from hospital called and said that your patient is troubling us and roaming in the ward. But when ASI was contacted on phone, he said no doctor has checked him even once and he hasn’t even been provided food/tea. Then we informed the ACP (East)…Later we sent tea for the patient, even then none from hospital staff agreed to deliver it to him. Then our policeman went and delivered tea to his room…Again on the same night, when cops reached hospital with food, none from hospital agreed to hand it over to ASI. For 45 minutes, the policeman who went to give food was made to stand and then told to deliver it on his own.”

The letter added, “At around 1.30 am on April 19, hospital staff informed that ASI has to be shifted to civil hospital because he had high blood sugar. Doctor said none from their staff will accompany him and police should send their personnel to shift him…”

Speaking to The Indian Express, ACP (East) Devinder Chaudhary said, “After the ASI complained to us, I deployed SHO division no. 7 to send food for ASI at our own level… Our cop reached hospital at 10 pm and till 11 pm none from the hospital agreed to deliver food to him. They said police should do it. How can a cop who went there without any safety gear or PPE kit deliver food to a patient? It only after I spoke to joint commissioner Brar that hospital staff delivered food to our patient…If this is how they treated a police patient, then what about common people. The SHO gave me written complaint which I forwarded to the police commissioner.”

Meanwhile, the administration and health department are now blaming each other for poor facilities at the MCH.

Navraj Singh Brar, joint commissioner Ludhiana MC and in-charge for the MCH isolation facility, said, “The patient was given food in time. However, the medical specialist on duty was absent, for which health department is responsible. Deputy commissioner has issued a showcause notice to civil surgeon for doctor’s absence.”

Meanwhile, Dr Rajesh Bagga, Ludhiana civil surgeon, said, “The patient was not given food in time, which is the responsibility of the civil administration. I had put doctors on duty at MCH and a reply will be submitted to DC’s notice soon.”

Don’t miss these articles on Coronavirus from the Explained section:

‣ Mask or no mask? Why the guidance has been shifting

‣ Besides a face cover, should I wear gloves when I go outdoors?

‣ Can coronavirus damage your brain?

In half of Rajasthan's districts, more Covid patients in rural areas | Jaipur News

Wed Jun 3 , 2020
JAIPUR: In a reversal of trend, rural areas in Rajasthan now have more Covid-19 patients than urban in almost half of the state’s districts. In some districts, more than 90% of the positive cases are in the rural areas. Jaipur district has recorded more than 100 positive cases from its […]