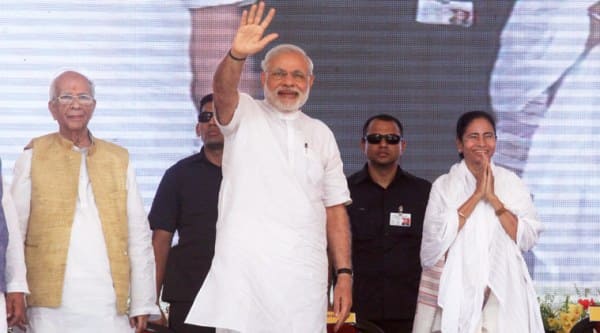 TMC supremo Mamata Bannerjee today rubbished allegations of understanding between her and BJP, stating that she attended the IISCO programme along with Prime Minister Modi as it was related to the state’s development.

“If I don’t go, some people will say I lack courtesy. If I go, you will do Hindu-Muslim politics. There is a limit to everything and all kind of canards.”

“And why will I not go, we have given land to IISCO plant and it is a programme relating to the development of the state. Why will I allow others to take away the credit?” she said while addressing a Trinamool Congress Chatra Prasihad (TMCP) programme.

Banerjee’s comments come in the backdrop of allegations levelled by CPI(M) and Congress that her sharing of dais with Modi during the inauguration of modernised IISCO steel plant, was a result of a covert political understanding between BJP and TMC, over CBI going slow on the Saradha scam and TMC helping BJP by passing bills in Rajya Sabha.

Both Banerjee and Modi during the May 10 programme at Burnpur, had spoken in favour of strengthening the federal structure of the country by keeping the country ahead of state politics.

The West Bengal Chief Minister had also held a one-to-one meet with Modi and requested him to give a complete debt waiver to the debt-ridden state.

Banerjee was a bitter critic of Modi and his policies since last year’s Lok Sabha poll. The relationship between the two plummeted last year when the Chief Minister refused to attend several meetings called by the Prime Minister.

Modi too during his election campaign in Bengal last year criticised the Trinamool Congress government on the multi-crore Saradha scandal and had promised to book the guilty.

Banerjee today also gave a call for defeating the CPI(M), Congress and BJP in days to come and cautioned critics not to teach her about the moral values of politics.

“In the coming elections, we need to search for the CPI(M), Congres and BJP candidates and defeat them. We need to give them a befitting reply,” she said.

“Please don’t teach me moral values of politics. I am a product of student politics. Student politics has taught me to survive against all odds. I have come a hard way,” she said.

Criticising a section of the media for creating a mountain out of a molehill, she said people have not forgotten the “horrors of CPI(M) rule” in Netai, Khejuri, Nandigram or Keshpur.

Banerjee made it clear that for Trinamool Congress, ideology and commitment to the masses was supreme.

“We left the UPA 2 government and our ministerial berths as we were against the anti-people FDI in retail. No other party has such kind of conviction and commitment to the masses,” she said.

The Chief Minister cited the list of achievements of her government for developing the state.

“The Left had ruined the state in the last 34 years. We have worked hard to bring back its lost glory. With the student representatives of the various colleges I want to create a talent bank for future. And with their help I want to take the state to a new height,” she added.

Wed Jun 3 , 2020
Paneerselvam TRICHY: A 55-year-old man in Pudukkottai district of Tamil Nadu was arrested on Tuesday for murdering his daughter. The man strangled his daughter believing a woman tantrik who told him that he would become rich if he murdered his daughter. Police said the man, identified as Paneerselvam had four […]