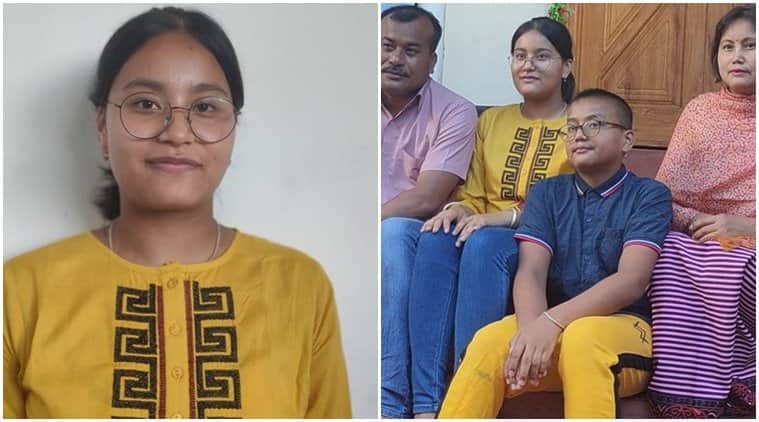 In Frame: Reshmi Nangdeibam and her family. (Express Photo)

The Board of Secondary Education Manipur (BOSEM) on Monday declared results of the state High School Leaving Certificate examination. A total of 38,664 candidates — 19,824 girls and 19,040 boys — had appeared in the exams, which was conducted in 140 centres across the state.

Reshmi Nangdeibam, a student of Pitambara English School, emerged as the leading scorer from her state, with a total of 579 marks. The topper plans to study biology and aspires to become a doctor. She said medical science has fascinated her since childhood.

A resident of Khongman Zone 5, which falls in Imphal East district, her father is a BSF head constable and is posted at Koirengei Imphal at present. Nangdeibam, who is the oldest of the two siblings, explained that she doesn’t follow any specific routine to study and takes it up whenever she finds time.

The board recorded a passing percentage of 65.34 this year, a decline of 9.35 per cent as compared to the previous year. Despite the drop, state education minister, Th Radheshyam stated that the overall performances of the students have improved considerably.

“According to an assessment conducted by the stakeholders concerned on the performance of students, we have found out that the overall performances have improved in terms of quality,” he said in this regard.

He pointed out that the main reason behind the decrease in the percentage was because of the strict conduct of the examinations in order to prevent students from using unfair means.

As per an official record, 102 students were expelled for using unfair means and impersonation while five were withheld. The minister also stated that the number of those expelled is the highest of all the exams conducted in the state.