‘My luggage has reached UP, I am stuck in Haryana …can’t go back to Punjab now’ 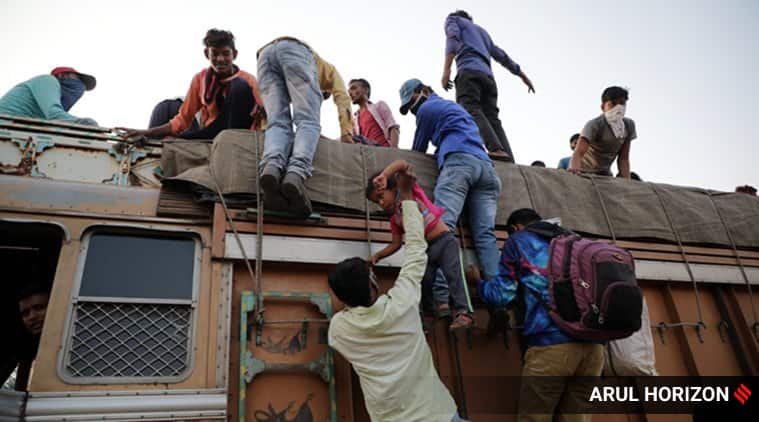 A group of 80, including Ranbir and his family, had left for Hardoi in May 15. (Representational image)

When Ranbir Kumar hired a tempo for seven members of his family for Rs 14,000 (Rs 2,000 per person), he had hoped to cover the 700 km distance from Ludhiana to Hardoi in UP in less than a day’s time.

But things didn’t go as planned. A group of 80, including Ranbir and his family, had left for Hardoi in May 15. Five days later, they are divided between two shelter homes in two different states – Yamunanagar and Saharanpur and their luggage is on its way to Hardoi, but still not home.

“We were all told by the driver to get off at Ambala itself and walk a little bit. He said that after the police naka, we can get in the vehicle again. However, both the vehicles moved ahead leaving us behind, and we kept on walking from Ambala till Yamunanagar for about 72 km. At Yamunanagar, cops stopped us late in the evening. We were taken to a shelter home, and from there part of the group was sent to Saharanpur from where trains are leaving. Thank god that our families have not been separated. I am stuck here for the past 5 days while luggage of all the 80 passengers has moved ahead in tempos. The drivers told us that they have crossed Bareilly,” said Ranbir, adding that while men travelled standing in the tempos, women and children were sitting.

The entire group, including 25 women, 20 children, is from ‘vehras’ in Ludhiana’s Punjab Mata Nagar area. While Ranbir worked as a daily wager, his wife and daughter were domestic helps. “I think I made a wrong decision,” he says speaking from Yamunanagar shelter home over phone.

Amit Kumar, his nephew, said, “My cousin, Suraj, (Ranbir’s son), is in the tempo in which luggage is being carried. He managed to go as he was in the co-driver’s seat. I have told him to take care of luggage. I was working at an ice cream parlour and was without work since March end, so I decided to go to my village in Hardoi.”

Saying that he cannot now retrace his steps to Punjab, he added: “Now my two brothers, who are still in Ludhiana, have told me that they are back to work. But my luggage has reached UP and I am midway in Haryana, I have no choice but to go to my village in UP. From five days, we have been in this shelter home and after reaching Hardoi too, we will have to be stay in shelter home. This is torturous. I am worried about my luggage as well.”

Everyone spoken to in the group said that private vehicles were being hired due to unending wait for trains. Groups, they said, have been pooling money to fund their travel home to avoid a journey by foot.

But many of these vehicles have hit roadblocks in Haryana or on UP border.

Mohd Ashfaq, a friend of Ranbir who decided to stay back, said, “I had advised him not to go in this risky manner, and now they all are stuck. People are leaving rooms and quitting work in panic.’

Those who haven’t been able to pool funds for group travel, have been waiting along highways for private vehicles willing to give them a ride for money.

Surinder Kumar is one such worker from Mundian Kalan who has left his room to go to his native place in Bihar. He said: “I have registered myself for train as well, but I am trying to go in a private vehicle as well. I go to GT Road on daily basis looking for a vehicle that will take me to Purnia.”

Nassiruddin and his wife, Sayra, have also vacated their room in Phullanwal village. As they waited along the road on NH-1 with their three kids, Nassiruddin said,” We have to go to Shahjahanpur and we are waiting for some vehicle if it passes through NH-1. Our kids are small and it’s too hot. We have Rs 5000 with us. We want to reach our village, come what may.”

Raj Kishore from Gorakhpur, another migrant worker on the road, said: “I am walking home. If someone will give me lift, I will pay accordingly. I can’t wait for the train.”