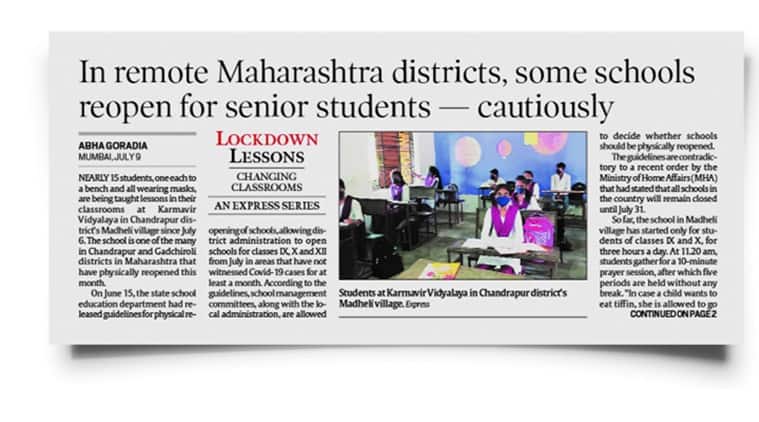 Schools in Gadchiroli and Chandrapur districts, which had physically reopened between July 1 and July 6, shut down again this week in compliance with Union Ministry of Home Affairs (MHA) orders that said that schools across the country would remain closed till July 31.

As many as 167 schools in Gadchiroli and over 50 in Chandrapur had resumed operations for students of classes IX, X and XII after the state school education department issued guidelines on June 15 for physical reopening of schools.

The guidelines allowed the district administrations to open schools for senior classes from July in areas that have not witnessed Covid-19 cases for at least a month. The school management committees, along with local administration, were to decide whether schools should be physically reopened.

“We shut the schools from Monday after we received an order from the collector asking us to comply with MHA directives. Cases in Gadchiroli are also increasing after CRPF men were found Covid-19 positive. In Gadchiroli, online education is not possible due to issues with mobile networks… Many teachers are visiting villages and conducting classes in open spaces,” said education officer Rajkumar Nikam.

Schools in Chandrapur are also sending teachers to villages and have stopped physical classes. Karmavir Vidyalaya in Chandrapur’s Warora taluka is catering to four villages – Bori, Galka, Wadgaon and Pawni – by sending a teacher to each village twice since the last eight days.

“We will again make a plan for the coming days. We feel that knowledge must reach students, especially since there is no case of Covid-19 in our area. Parents and students are also interested in classes being held,” said headmaster Balu Bhoyar.

Wardha education officer Ulhas Narad said, “School education officer Vikas Solanki asked us to bring the MHA directive to the notice of the collectors, after which it was decided that schools should not open physically until July 31. Moreover, lockdown has been imposed in some talukas that border cities and some teachers live in containment zones.”

Meanwhile, the government on Wednesday announced the formation of a state and district level school safety advisory committee for ensuring implementation of national disaster management guidelines. While the state committee will draw a perspective plan for the state’s disaster management, the district committee will draw district-level perspective plan, train teachers and conduct mock drills.