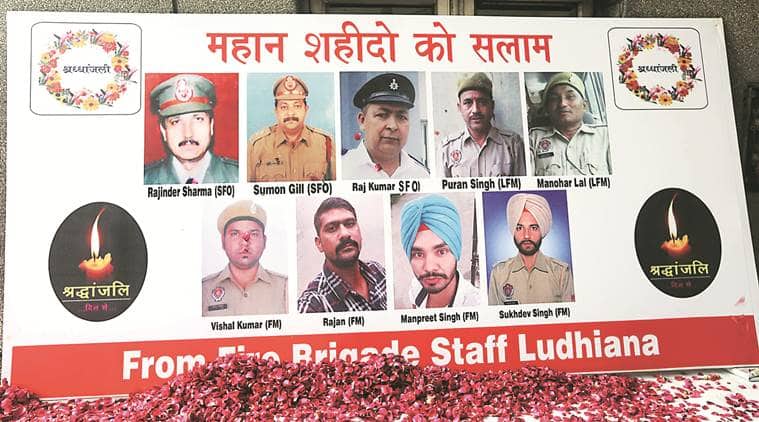 A tribute to the firemen who lost their lives in the 2017 plastic factory fire. (Express photo by Gurmeet Singh)

More than two years after two major fire tragedies in Ludhiana left the city in a shock and nine firefighters dead, thirteen firefighters from Punjab Fire Services (PFS) will finally be honoured for putting their duty before self. They will be honoured with the President’s Fire Service Medal for Gallantry on January 2 at the National Fire Service College in Nagpur by Union Home Minister Amit Shah. Nine of them who lost their lives will be awarded posthumously.

All thirteen awardees, including families of nine firefighters who are being honored posthumously, left for Nagpur on Monday. Speaking to The Indian Express, Bhupinder Singh, Assistant Divisional Fire Officer (ADFO), Ludhiana, said: “It is probably for the first time that 13 firefighters from one state are being given a national honour together.”

On May 11, 2017, a massive fire had engulfed Mallika Textiles in Vijay Nagar and it took more than seven hours to douse it. With drums of chemicals stored inside, there were multiple blasts and four firefighters, including sub-fire officer Hazura Singh and three firemen Naresh Kumar, Lovelesh Sood and Saudagar Singh, received 40 to 50 per cent burn injuries. Despite the blasts and the burn injuries, they rescued four labourers who were stuck inside. They worked without safety masks and with handkerchiefs tied around their faces amid exploding chemical drums. 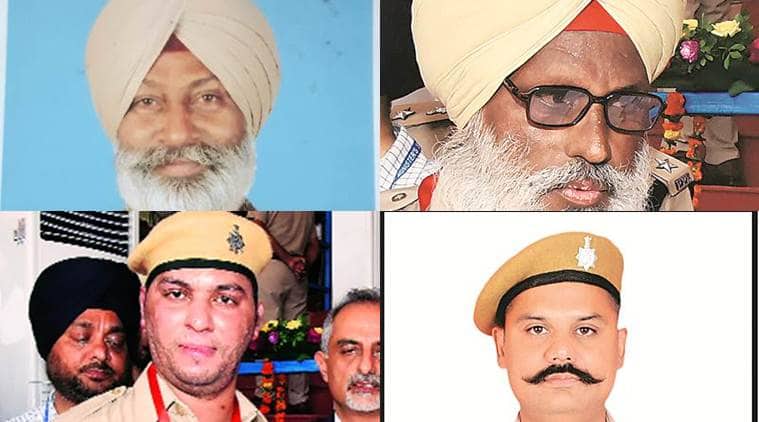 “It took me nearly a year and a half to recover from burn injuries and I spent two months in hospital. We had received call at 6.45 am and for nearly three hours, I and my three teammates kept working till we could but later we fainted. We also rescued four labourers who were stuck inside. We had no masks or other safety gears but saving lives was more important. Even now, I get a sensation of needles pinching my skin when it is too hot or too cold. I still cannot sleep properly at night and keep changing sides. It feels good that our effort is finally being recognised,” said Hazura Singh.

Such was the tragedy that bodies of three firemen — Manohar Lal, Sukhdev and Manpreet — were never found from the smouldering debris even after days of search operation and they were declared dead by the administration later.

Speaking to The Indian Express, ADFO Bhupinder Singh said that the loss suffered by the nine families who lost their breadwinners in November 2017 tragedy can never be compensated for, but the honour was much deserved. “They have left for Nagpur today and our liaison officer is accompanying them. We had recommended these names to the central government in 2018 and since then the wait was on.”

Navan, son of deceased fireman Manohar Lal, said that his father’s sacrifice was finally being recognised after two long years. “We could not even pay our last respects to him as his body was never found. My mother is still in shock,” he said.

Malkit Singh, father of deceased fireman Manpreet Singh, said, “I lost a young son. He wasn’t even married. His body was never found. Because of him, I will be honoured, but without him it is all meaningless. I wish he was alive.”

Thu Jun 11 , 2020
JAIPUR: As Covid-19 cases increased with relaxations in lockdown, chief minister Ashok Gehlot on Wednesday once again imposed regulations on the movement of people and vehicles from across the state borders. The restrictions will be in place for the next seven days. As per the order, no person can enter […]