Tense protests over the death of George Floyd and other police killings of black men grew Saturday from New York to Tulsa to Los Angeles, with police cars set ablaze and reports of injuries mounting on all sides as the country lurched toward another night of unrest after months of coronavirus lockdowns.

The protests, which began in Minneapolis following Floyd’s death on Monday after a police officer pressed a knee on his neck for more than eight minutes, have left parts of the city a grid of broken windows, burned-out buildings and ransacked stores.

The unrest has since become a national phenomenon as protesters decry years of deaths at police hands.

The large crowds involved, with many people not wearing masks or social distancing, raised concerns among health experts about the potential for helping spread the coronavirus pandemic at a time when overall deaths are on the decline nationwide and much of the country is in the process of reopening society and the economy.

After a tumultuous Friday night, racially diverse crowds took to the streets again for mostly peaceful demonstrations in dozens of cities from coast to coast. The previous day’s protests also started calmly, but many descended into violence later in the day.

– In Washington, growing crowds outside the White House chanted, taunted Secret Service agents and at times pushed against security barriers. President Donald Trump, who spent much of Saturday in Florida for the SpaceX rocket launch, landed on the residence’s lawn in the presidential helicopter at dusk and went inside without speaking to journalists.

– In Philadelphia, at least 13 officers were injured when peaceful protests turned violent and at least four police vehicles were set on fire. Other fires were set throughout downtown.

– In the Greenwood District of Tulsa, Oklahoma, the site of a 1921 massacre of black people that left as many as 300 dead and the city’s thriving black district in ruins, protesters blocked intersections and chanted the name of Terence Crutcher, a black man killed by a police officer in 2016. A boy holds a sign during a protest in downtown Los Angeles, Friday, May 29, 2020, over the death of George Floyd.

– In Tallahassee, Florida, a pickup truck drove through a crowd of protesters, sending some running and screaming as the vehicle stopped and started and at one point had a person on its hood, police said, but no serious injuries were reported. Police handcuffed the driver but did not release his name or say whether he would face charges.

– In Los Angeles, protesters chanted “Black Lives Matter,” some within inches of the face shields of officers. Police used batons to move the crowd back and fired rubber bullets. One man used a skateboard to try to break a police SUV’s windshield. A spray-painted police car burned in the street.

– And in New York City, video posted to social media showed officers using batons and shoving protesters down as they made arrests and cleared streets. Another video showed two NYPD cruisers driving into protesters who were pushing a barricade against a police car and pelting it with objects, knocking several to the ground.

“Our country has a sickness. We have to be out here,” said Brianna Petrisko, among those at lower Manhattan’s Foley Square, where most were wearing masks amid the coronavirus pandemic. “This is the only way we’re going to be heard.” 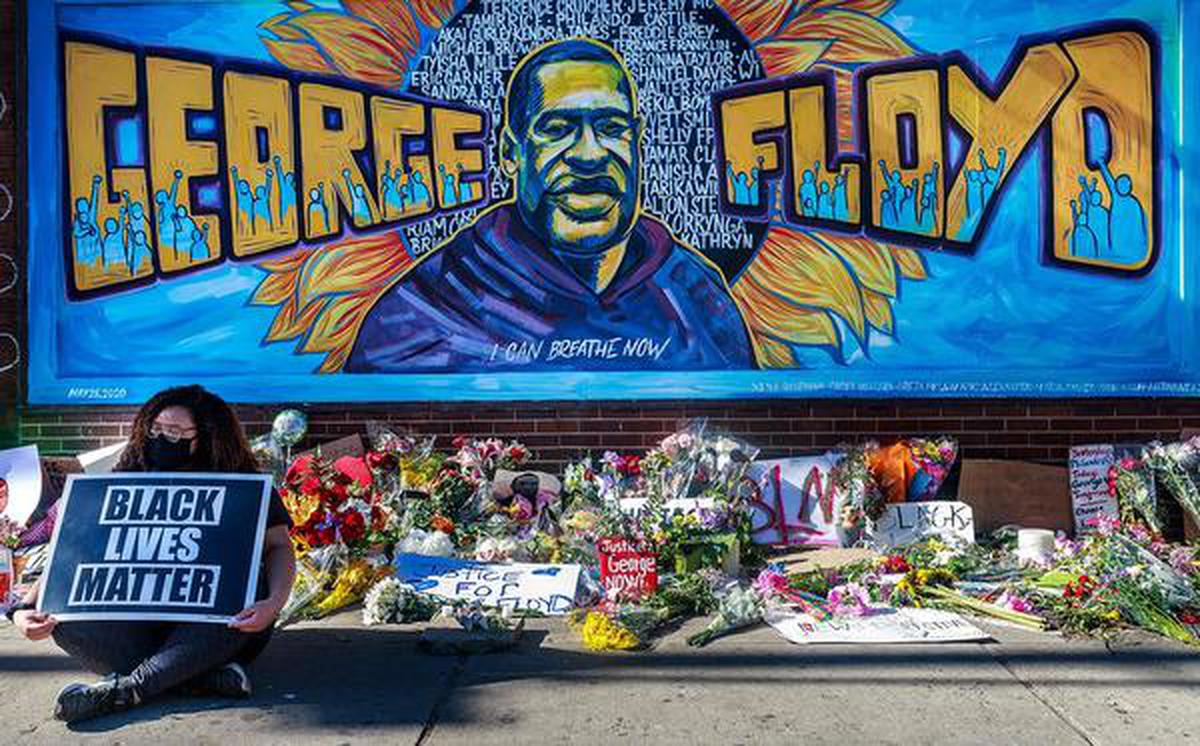 Anger on the streets: Flowers, signs and balloons are left on Friday near a makeshift memorial to George Floyd near the spot where he died while in custody of police in Minneapolis, Minnesota.

Back in Minneapolis, the city where the protests began, 29-year-old Sam Allkija said the damage seen in recent days reflects long-standing frustration and rage in the black community.

“I don’t condone them,” he said. “But you have to look deeper into why these riots are happening.”

“The situation in Minneapolis is no longer in any way about the murder of George Floyd,” Mr. Walz said. “It is about attacking civil society, instilling fear and disrupting our great cities.”

Soon after the city’s 8 p.m. curfew went into force, lines of police cars and officers in riot gear moved in to confront protesters, firing tear gas to push away throngs of people milling around the city’s 5th police precinct station. The tougher tactics came after city and state leaders were criticized for not forcefully enough confronting days of violent and damaging protests that included protesters burning down a police station shortly after officers abandoned it. 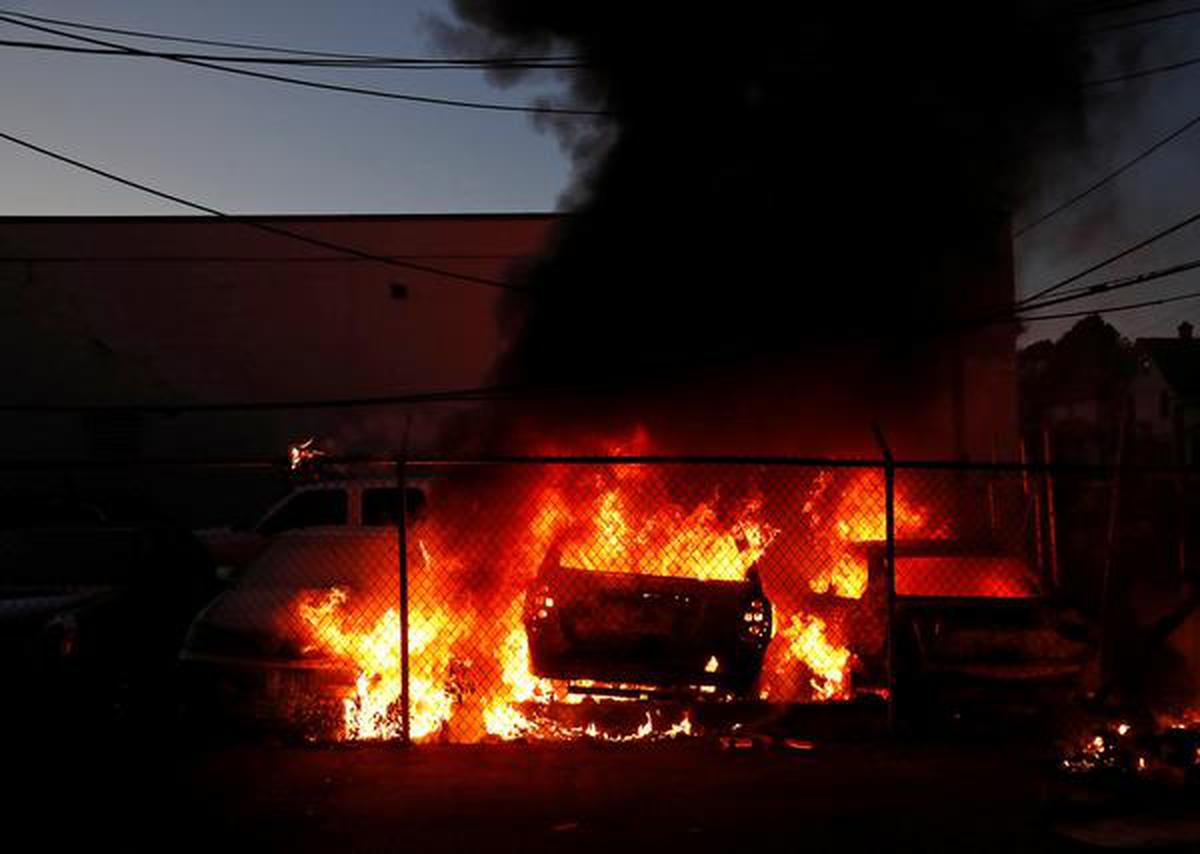 Vehicles are seen on fire during a protest against the death in Minneapolis police custody of African-American man George Floyd, in Minneapolis, Minnesota, U.S., May 29, 2020.
| Photo Credit:
REUTERS

Overnight curfews were imposed in more than a dozen major cities nationwide, ranging from 6 p.m. in parts of South Carolina to 10 p.m. around Ohio. People were also told to be off the streets of Atlanta, Denver, Los Angeles, Seattle and Minneapolis — where thousands had ignored the same order Friday night.

More than 1,400 people have been arrested in 16 cities since Thursday, with more than 500 of those happening in Los Angeles on Friday.

The unrest comes at a time when most Americans have spent months inside over concerns surrounding the coronavirus, which the President has called an “invisible enemy.” The events of the last 72 hours, seen live on national television, have shown the opposite — a sudden pivot to crowds, screaming protesters and burning buildings, a stark contrast to the empty streets of recent months.

“Quite frankly I’m ready to just lock people up,” Atlanta Police Chief Erika Shields said at a news conference. Demonstrations there turned violent Friday, and police were arresting protesters Saturday on blocked-off downtown streets. “Yes, you caught us off balance once. It’s not going to happen twice.”

This week’s unrest recalled the riots in Los Angeles nearly 30 years ago after the acquittal of the white police officers who beat Rodney King, a black motorist who had led them on a high-speed chase. The protests of Floyd’s killing have gripped many more cities, but the losses in Minneapolis have yet to approach the staggering totals Los Angeles saw during five days of rioting in 1992, when more than 60 people died, 2,000-plus were injured and thousands arrested, with property damage topping $1 billion. 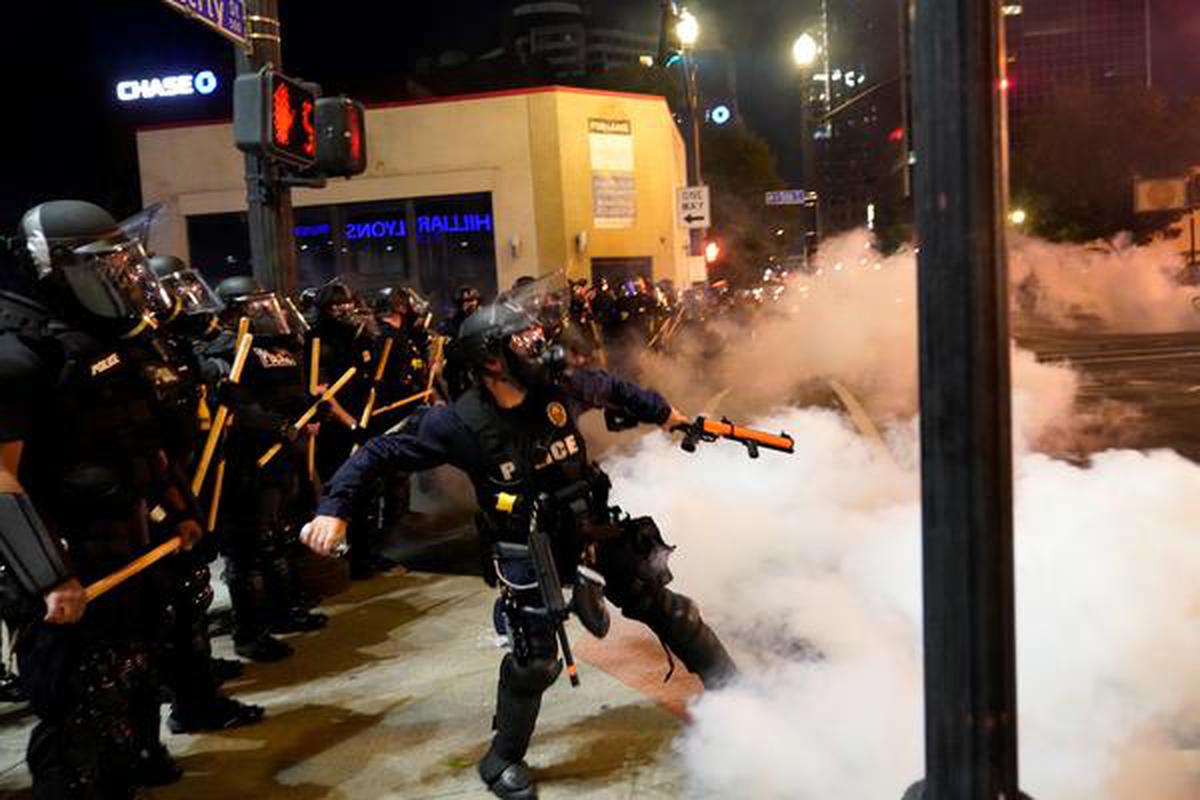 A police officer throws a canister of gas during a protest against the deaths of Breonna Taylor by Louisville police and George Floyd by Minneapolis police, in Louisville, Kentucky, U.S. May 29, 2020.
| Photo Credit:
REUTERS

Many protesters spoke of frustration that Floyd’s death was one more in a litany. It came in the wake of the killing in Georgia of Ahmaud Arbery, a black man who was shot dead after being pursued by two white men while running in their neighborhood, and in the middle of the coronavirus pandemic that has thrown millions out of work, killed more than 1,00,000 people in the U.S. and disproportionately affected black people.

The officer who held his knee to Floyd’s neck as he begged for air was arrested Friday and charged with third-degree murder and second-degree manslaughter. But many protesters are demanding the arrests of the three other officers involved.

Mr. Trump stoked the anger on Twitter, ridiculing people who protested outside the White House and warning that if they had breached its fence, they would “have been greeted with the most vicious dogs, and most ominous weapons, I have ever seen.”

Leaders in many affected cities have voiced outrage over Floyd’s killing and expressed sympathy for protesters’ concerns. But as the unrest intensified, they spoke of a desperate need to protect their cities and said they would call in reinforcements, despite concerns that could lead to more heavy-handed tactics.

Minnesota has steadily increased to 1,700 the number of National Guardsmen it says it needs to contain the unrest, and the Governor is considering a potential offer of military police put on alert by the Pentagon.

Governors in Georgia, Kentucky, Ohio and Texas also activated the National Guard after protests there turned violent overnight, while nighttime curfews were put in place in Portland, Oregon, Cincinnati and elsewhere.

Police in St. Louis were investigating the death of a protester who climbed between two trailers of a Fed Ex truck and was killed when it drove away. And a person was killed in the area of protests in downtown Detroit just before midnight after someone fired shots into an SUV, officers said. Police had initially said someone fired into the crowd from an SUV.

Profile | Who is Benny Gantz, the new face in Israel Cabinet?

Sun May 31 , 2020
Benny Gantz, a relative neophyte in Israeli politics who vowed during three inconclusive elections not to serve under a criminally indicted Prime Minister, was sworn in on May 17 as Benjamin Netanyahu’s Deputy Premier. Under the deal he agreed in April, which supporters have derided as a betrayal of trust, […]