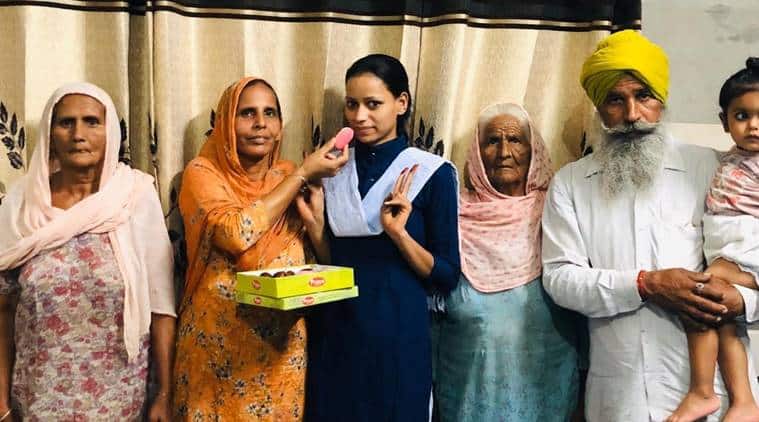 Balwinder Kaur, with her in-laws, at village Mohammadgarh of Malkerkotla. She scored 99.7% in humanities stream. (Express photo)

The Class 12 PSEB board results Tuesday added to the joy of a newly married 18-year-old from Ludhiana’s Ishanpur village. Two days after her marriage on July 19, Balwinder Kaur could hardly contain her excitement after being told that she had scored 99.77 per cent marks in humanities stream. Balwinder, who turned 18 on July 13 — almost a week before her wedding, scored 449 marks out of 450.

Not far away from the village, a 17-year-old student of Ludhiana’s R S Model Senior Secondary School, Shastri Nagar, made her mother, a factory worker, proud by scoring 99.33 per cent marks (447/450) in science stream in the Class 12 boards.

With some exams cancelled due to the coronavirus pandemic, the results this year have been calculated using the ‘best performing subjects formula’. For instance, if a student appeared in exams of four subjects, then the average marks of the best three scoring subjects were awarded to him in the remaining subjects for which exams had to be cancelled. Consequently, the board did not release any merit list declaring state-level ‘toppers’.

‘Moving to Canada my next goal’

For Balwinder and her husband, Gurwinder Singh (25), the good score means added confidence to pursue their dream to move to Canada.Gurwinder, a truck mechanic in Dubai who is currently home at village Mohammadgarh in Malerkotla, said that he wants Balwinder to clear IELTS and apply for PR in Canada. “We want to move to Canada. She is a bright student and we want her to clear IELTS too, get enough bands and apply for PR in Canada,” he said.

Talking about getting married at such a young age, Balwinder, a student of Government Senior Secondary School, Rajewal (Ludhiana), said:”My parents married me at this young age because my mother doesn’t keep well and they had some financial constraints. But my husband and in-laws are very happy seeing my results today… I also want to move abroad. I will continue studying once I reach Canada… I am very happy with my marriage. The aim is now IELTS bands.”

In the results declared Tuesday, the 18-year-old scored 75/75 in English and Punjabi, the two exams she wrote and in rest of subjects, she scored 100/100 in History, 100/100 in Political Science and 99 in Physical Education on basis of average marks formula adopted by the PSEB to calculate results this year.

“We are very happy with her results today and distributing sweets,” added her elated mother-in-law.

‘My mother is my hero’

Rohit (17), who had lost his father when he was just nine, dedicated his success to his mother, Suman Kumari, for enduring the tough grind as a factory worker for all these years to ensure that her children were not denied a shot at good education. 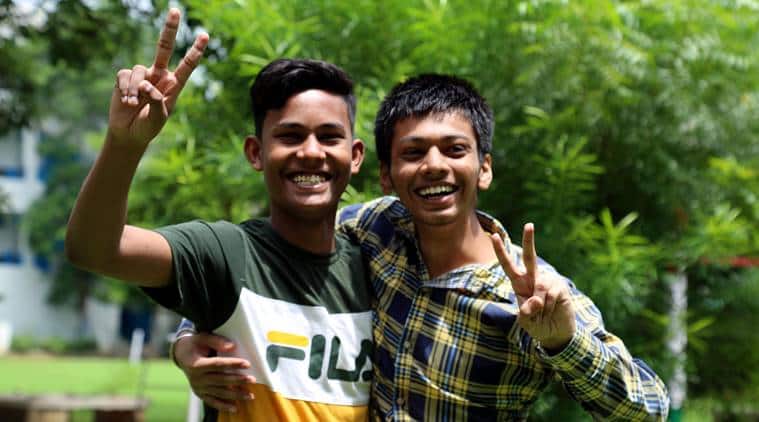 “My father passed away in 2011 when I was just nine. I do not remember much about him except that he was a very nice man. My mother is my hero. She started working in a factory for just Rs 6,000 a month so that I and my elder sister do not face any difficulty in our studies or otherwise. She did everything she could to give us the best of whatever she could. She works in a bike spare parts factory just for us…Whatever she has done for us is the best a mother can do.. We never felt deprived of anything. I knew I had to make her proud and make her hard work count. Like other students, we could never afford tuitions despite opting for a non-medical stream. I relied on self-studies,” said the Ludhiana boy from R S Model Senior Secondary School, Shastri Nagar, who Tuesday figured among top scorers in the district.

Rohit scored 75/75 in English, 75/75 in Punjabi, 97/100 in Chemistry and 100 each in Maths and Physics. The exams for Maths and Physics were cancelled due to coronavirus, but average marks scored in other subjects were used to calculate results.

“I had scored 99 per cent in pre-boards also so I was confident of scoring at least 98 per cent in finals too. Whatever I was able to achieve is due to my mother’s hard work and faith in me. But there’s a long way to go…I have to become a computer science engineer, not an average one. I will be excelling in it and developing some dream softwares for which I already have ideas in my mind…The journey has just started to make my mother proud,” said Rohit.

Rohit added that apart from his mother, he looks up to former Indian cricket captain M S Dhoni.

“Mahendra Singh Dhoni… ! His biopic made me realise that nothing is unachievable despite struggles and difficulties we may face in life. He is my biggest inspiration after my mother. I remember each detail of his life’s struggles and whenever I am low, I think about him. If he could become captain of Indian cricket team despite all odds stacked against him, why can’t I achieve what I want,” said Rohit.

He also credited his teachers and school managements of his current and previous schools for his good grades. “My ex-school Dhami Model School where I studied till Class 8, gave me a full fee concession so that my mother is not burdened. My current school gave me a half-fee concession and teachers always helped me. Like other students, I could never afford tuition, so my teachers only helped me in clearing all doubts whatever time it used to be,” said Rohit.

“Even our landlord doesn’t take any rent from us after our father’s death knowing the meagre salary of my mother. Everyone helped us in whatever way they could,” added Rohit, a resident of Jammu Colony in Ludhiana.

The 17-year-old said that he stays away from social media and doesn’t have a smartphone of his own. “I just watch some comedy and motivational videos on my sister’s phone. I don’t have a smartphone of my own and I don’t need one as of now. I also stay away from social media…My mother is my hero. She struggled each day so that we can excel,” says Rohit.

Overall, the pass percentage of Ludhiana district dipped from 90.83 per cent last year to 89.99 per cent this year.

Agents in Punjab upset over ‘flat rate’ of commission

Wed Jul 22 , 2020
The commission agents (arhatiyas) in Punjab are annoyed over the flat rate provided by the Central government for purchase of wheat in the last Rabi Marketing Season (RMS), contrary to the statutory norms of 2.5% of the Minimum Support Price (MSP). The State government has also come out in support […]