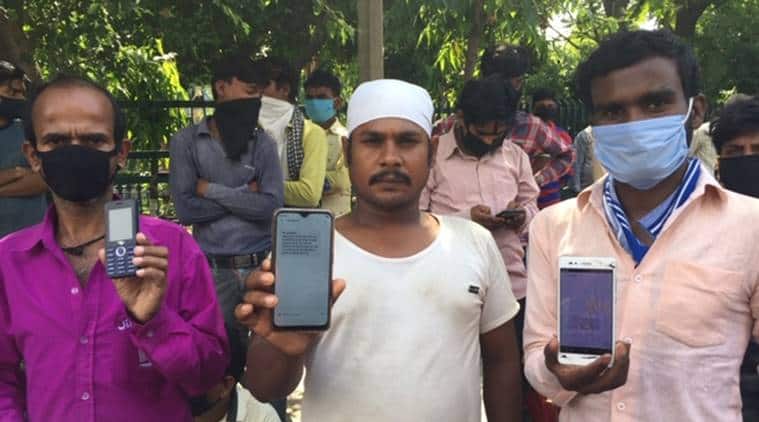 Migrant laborers show the SMS sent to them on behalf of Punjab CM Captain Amarinder Singh as they wait outside Guru Nanak Stadium in Ludhiana Monday. (Photo: Divya Goyal)

It is 38 degrees in Ludhiana. With parched throats and an empty water bottle in hand, Rajesh Kumar and Pinky are squatting outside Guru Nanak Stadium with their children Radhika (10), Shivanshu (8) and Raghav (3). Like hundreds of other migrants sitting around them, they are waiting for that one SMS that will let them board a Shramik Train to their native place Hardoi in Uttar Pradesh.

Sweating under the scorching sun, as Rajesh watched his children cry for water, a “personalised” SMS addressed to migrants that he received from Punjab Chief Minister Capt Amarinder Singh, made him fume. “Priya pravasi mitra, main aapse shaanti aur dhairya banaye rakhne ka aagrah karta hun…dhairya banaye rakhein…(Dear migrant, I request you to be patient),” says the SMS that was sent out to thousands of migrants on behalf of the CM.

“Aur kitna dhairya? Kya koi batayega ki humein aur kitna dhairya rakhna hai abhi?” asks Rajesh, who had registered for a Shramik train on May 5, and received message from the Punjab CM on May 11. Thirteen days have passed, but he still hasn’t got an idea when his family will get to board a train.

On Monday, they even had to vacate their rented room in Shivpuri area as he had no money left to pay their Rs 2,000 a month as rent. “The landlord asked us to vacate the room. Three months of rent was already pending. Since the lockdown started, I have not been paid salary. My employer had no orders. So here I am sitting on the road with my wife and children, and they are asking us to be patient. Gareeb hai isliye koi sunwai nahi hai yahaan (We are poor so no one listens),” says Rajesh, who used to steam iron clothes in a garment factory.

He and Pinky are not sure if they will return to Punjab or if their children will ever go to school again. “Yahaan khaane ko nahi hai, school kahaan se bhejenge? (We don’t even have anything to eat, how will we send them to school?),” asks Pinky.

Like Rajesh, hundreds of other migrants wait outside the stadium — where they are medically screened and issued tickets before boarding Shramik Trains — flashing their phone screens. “No word on confirming the status of our registration, but they ask us to be patient. Dhairya rakhte rakhte sadak par aa gaye hain… Do hafte ho gaye hain booking kiye par koi jawaab nahi… (Our patience has landed us on the streets. Two weeks and there is no word on the status of our registration),” says Ramjisa, 38, waiting to reach Bettiah in Bihar.

The wait has been endless with many migrants even sleeping on the roads for 3-4 days, waiting for confirmatory messages, as they have no money to pay rent.

Jiya Lal, 50, who registered on May 2, says, “My son has died and my daughter-in-law is unwell. My daughter’s children are unwell too. I have nothing to eat here. No one is giving us work now. What should I do with this message?”

Urzi Miyan who registered for Sitamarhi in Bihar on May 4 and Rohit Yadav who registered for Azamgarh in UP on May 2, say, “Neither the Punjab government nor those of our native states consider us their own. They need us only when they require votes. Had we not been poor, our condition wouldn’t have been this. Do they tell people in foreign countries to keep patience like they are telling us? We have been running from pillar to post for the last 16 days. No one given a reply to us…”

Sagar Setia, sub-divisional magistrate (SDM) Payal cum nodal officer for Shramik Trains in Ludhiana, said that more than 7.50 lakh migrants have registered to go back home but as of now nearly a lakh have been able to go via 68 trains that have chugged off from Ludhiana till Monday and 12 more are scheduled for Tuesday. “We have sent 68 trains with average 1,200 adults and 150 children in each of them. So just a lakh have gone home till now. A lakh registrations were received on day one itself. So sending 7 lakh back home is a mammoth task. We can’t do anything if people are gathering outside stadium without confirmatory messages. We only sent them registration messages after they registered on helpline portal. The SMS mentioning CM’s name were a part of communication effort by government functionaries in Chandigarh to connect with migrants and let them know that they are being taken care of,” said Setia.

Outside Guru Nanak Stadium, as policemen started shooing away hundreds of migrants and cops shouted ‘peeche hato, odhar chalo’ (get aside, go there), nine-month pregnant Sudha (22), was in tears. She has no idea from where money will come for her delivery as she stood under scorching sun with her husband Joginder Kumar. “We have to go to Hardoi. I do not know how my delivery will be done. It can happen anytime. We have no money,” said Sudha. For her, there is no time to keep ‘dhairya’.

It all depends on coordination with recipient state

Vikas Partap, principal secretary, PWD (B&R), nodal officer for Shramik Trains, Punjab said operating these trains is a mammoth exercise to ferry nearly 12 lakh people out of the state, and depends on coordination with other states.

“The first step is consent from the recipient state. Without their consent, we cannot send a train there. Till today, we have run 190 trains and approximately 2.20 lakh people have been sent home to different states. On Tuesday, we will cross the 200-mark for trains and 10-12 trains a day are being run from Ludhiana alone. But the exact number of how many more trains are required to ferry the remaining people cannot be predicted because even of the 12 lakh people who wanted to go via trains, some might stay back as factories are opening and they will get work. Some are already gone in buses or private transport. Also, if we call 2,000 people, then only around 1,200 show up,” said Partap.

Asked if any state till now has refused to receive trains from Punjab, he said, “No, we have not received refusal from any state yet, but it all depends on coordination and arrangements made from both sides. Both states have to follow some protocols. Coordination with other states is being done on a daily basis.”

Divisional Railway Manager, Ferozepur division, Rajesh Aggarwal said that the railways was only acting as ‘facilitator’ and ‘taxi provider’ and it all depends on coordination between two states. “Punjab government has to notify us 48 hours prior to demand a train for a certain destination and we arrange it. But we are even arranging trains at a shorter notice for them. With social distancing, around 1,200 board a train, otherwise capacity is nearly 2,000. We are only facilitators. It’s like running a taxi service,” he said.