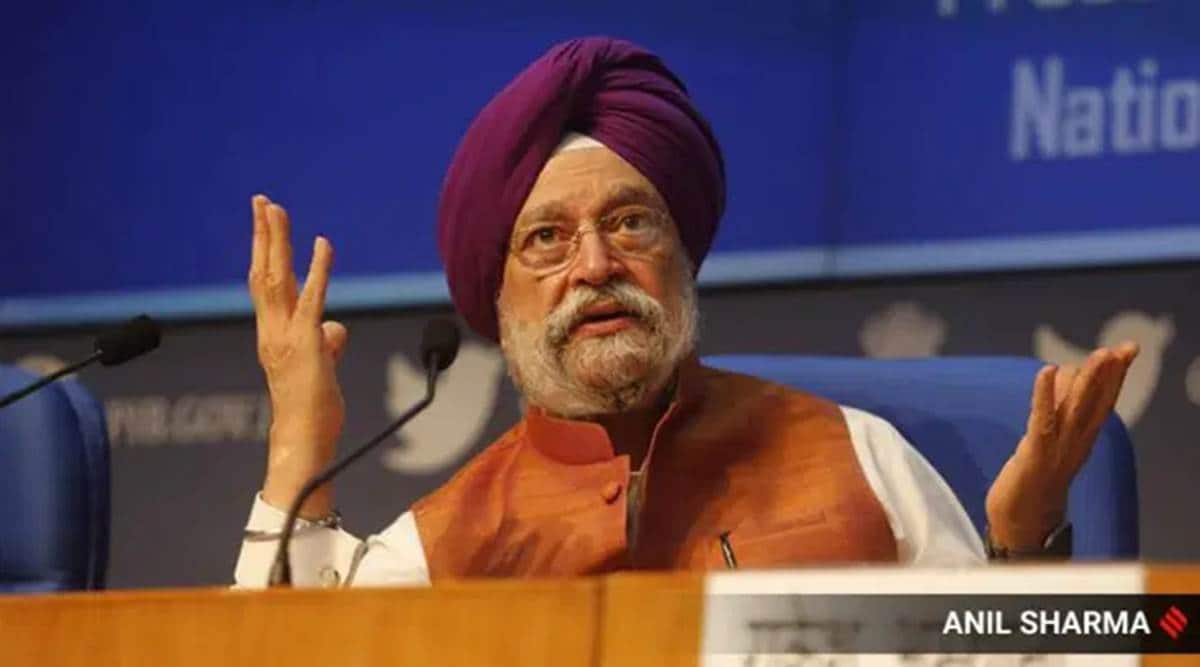 The minister added that so far, no proposal has been received from the Punjab government requesting for ‘international airport’ approval for Halwara in Ludhiana. (File)

While the Congress government in Punjab has already declared that an ‘international civil terminal’ is to come up at Ludhiana (Halwara IAF station), Union Civil Aviation Minister Hardeep Singh Puri Monday said that the central ministry has not declared the civil terminal coming up at Halwara as ‘international’ yet.

Asked about the financial and practical viability of a third international airport in Punjab, Puri, while speaking at The Idea Exchange session of The Indian Express, said, “Punjab already has two international airports, at Amritsar and Mohali (Chandigarh). If the Punjab government wants to have a third one, it has to be processed. Recently, the Cabinet approved an international airport for Kushingar (Uttar Pradesh), the same process has to be followed. International flight carriers consider demand and viability before deciding to fly from a particular airport and the same will apply for Ludhiana.”

The minister added that so far, no proposal has been received from the Punjab government requesting for ‘international airport’ approval for Halwara in Ludhiana. “As far as I know, a formal proposal has not been received from the Punjab government yet…. A civil enclave is coming up at Halwara which can be used for Regional Connectivity Scheme (RCS) flights only. When an airport has to be developed as an international one, a lot many things such as customs, migration etc have to be taken care of,” Puri told The Indian Express over phone in the evening.

As per additional information available with the minister’s office, a ‘civil terminal’ is coming up at Halwara Indian Air Force (IAF) station but it hasn’t been given any approval for international flights yet. “Till domestic flights don’t start operating from the new terminal coming up at Halwara, it can’t be given approval for international flights. The civil enclave is coming up as per Memorandum of Understanding (MoU) signed between the Punjab government and Airports Authority of India (AAI) but it has no approval for international flights yet. Initially, only regional connectivity flights such as under the UDAN scheme might start from there. Also, the one Ludhiana-Delhi flight (Air India) already operational from Sahnewal domestic airport under UDAN will also be shifted to Halwara once the new terminal comes up,” said the minister’s spokesperson.

Earlier, Ludhiana MP Ravneet Singh Bittu, while claiming credit for the project, had said that ‘international airport’ for Ludhiana got ‘necessary approvals’ only after he took up the matter with Chief Minister Capt Amarinder Singh and the central government.

The Punjab government and MP Bittu had in official statements also declared that “international flights from Ludhiana will be operational soon” and in all official communications, it was claimed that ‘international’ civil terminal was coming up at Halwara.

In a joint statement issed on December 3, 2018, by the state government and MP Bittu said, “The Punjab Cabinet approved an international civil terminal for residents of Ludhiana at Halwara Indian Air Force (IAF) station Monday. The Cabinet has given a go-ahead for signing of Memorandum of Understanding (MoU) between the Airports Authority of India (AAI) and the Punjab government..’

The statement, quoting Bittu, further said, “…Bittu stated that the first phase of the project, which will include development of a new international civil enclave over an area of 135.54 acres for full-fledged operations up to Code-4C type aircraft, is likely to be completed within three years…He said that the matter was first taken up by him and Capt Amarinder Singh with the central government…’

Then on December 20, 2018, another statement from the district public relations office, Ludhiana, issued on the behalf of deputy commissioner, said that an MoU was signed for ‘international civil terminal’. It said, “In pursuance of the decision of the Council of Ministers of December 3, 2018, approving the setting up of a New Civil International Air Terminal at IAF Station Halwara, Ludhiana, the Government of Punjab today entered into a Memorandum of Understanding (MoU) with the Airports Authority of India (AAI) for the same….It is expected that Phase I of the project i.e. Development of New International Civil Enclave in 135.54 acres for full-fledged operations upto Code-4C type of aircraft shall be completed within three years. The International Airport at Ludhiana would not only be a commercially viable project and facilitate better air connectivity for passengers of the State but will have a spinoff economic benefit for the industries in the State…”

Then on May 23 this year, an official release said, “After completion of land acquisition process, the Greater Ludhiana Area Development Authority (GLADA) has taken possession of 161.27 acres at Halwara for construction of an international civil terminal in Ludhiana…The Government of Punjab and the Airport Authority of India (AAI) had signed an agreement entering a joint venture for setting up a new civil and Cargo International Air Terminal at village Aitiana in tehsil Raikot at Indian Air Force (IAF) Station Halwara in Ludhiana…’

On May 27, Bittu in a statement again claimed that international flights “would start operating from Ludhiana soon”. The statement quoting Bittu read, “International flights from Halwara airport are expected to take off soon and it would give a new direction to the development of Ludhiana and other adjoining areas.”

He had informed that the 161.2703 acres land required for construction of the civil terminal has already been acquired and Greater Ludhiana Area Development Authority (GLADA) has taken possession of the said land. He said that they would try to get the runway construction completed on priority along with the construction of the terminal building so that international flights can start operating from here soon…’

But on Monday, MP Bittu, when contacted said, “Covid-19 derailed all the plans and the international civil terminal at Halwara is yet to get any approval from the central government.”

“It was my dream along with the vision of CM Captain Amarinder Singh to make the international airport at Halwara operational six months ahead of the end of Punjab government’s tenure but Covid has derailed all the plans. Now I have no idea when flights here will become operational and if they will be international or not. Right now, even the terminal building construction work has not started. The land has been acquired from the farmers. Our priority was to get flights started temporarily but even that is looking unlikely anytime soon. When there is no terminal yet, how will we get approval for an international airport from the central government? Yes we had planned and announced to start international flights from Ludhiana by December 2020 but it looks unlikely now…,” he added,

Meanwhile, S K Sharan, airport director Ludhiana, AAI, said, “Right now only a temporary civil terminal is coming up at Halwara from where regional RCS flights will be made operational first…It might be upgraded later into an international terminal which requires several approvals from the central government.”

Varinder Kumar Sharma, Ludhiana deputy commissioner, said, “The estimates for approach road and boundary walls have been prepared by GLADA worth Rs 15 crore and sent to AAI. Covid has slowed down the work on the airport but the plan is to have an international terminal in Ludhiana, according to which land has been acquired…”