Punjab: More buses roll in with 953 stranded outside state including 152 students 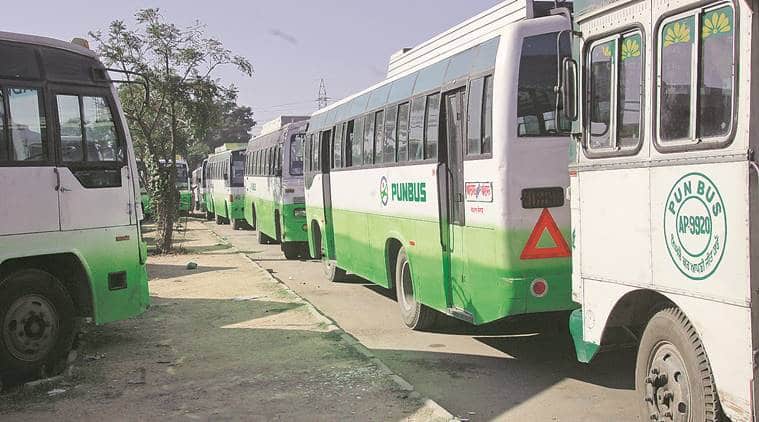 Punjab has sent 80 government buses to Nanded and another 60 buses to Jaisalmer to bring back 2,900 Punjab workers stranded there. (File photo)

A day after first batch of 243 passengers returned from Hazur Sahib in 8 buses, 953 – including 801 Nanded pilgrims and 152 students from Kota – entered Punjab from Bathinda.

Out of the Nanded pilgrims who returned on Monday, 500 came in 14 PRTC buses, and rest (301) on private buses hired by them. Punjab has sent 80 government buses to Nanded and another 60 buses to Jaisalmer to bring back 2,900 Punjab workers stranded there.

Also, after 7 buses sent by Kota administration reached Bathinda Monday with 152 students from Punjab, the state government had to deploy 7 of its own buses to ferry these students to their destinations.

So a total 147 buses have been engaged by Punjab government to ferry around 6,000 Punjabis stuck outside Punjab.

Out of 152 students who came from Kota Monday, 24 were from Bathinda and the rest from Ludhiana (25), Mansa (5), Faridkot (2) and Ferozepur, Amritsar and Chandigarh. While students were sent to their native districts after medical check-up, Bathinda DC B Srinivasan said that the 24 students from his district would not be sent home till their test reports are in.

At Civil Hospital, Mansa, girl students, who had returned from Kota, said, “We did not face any problem in meals or living etc. as we were living in PGs. We were home sick and as coaching institutes are closed now, hence there was no point staying back.”

State Transport Commissioner Dr Amarpal Singh told The Indian Express said, “We had coordinated with Kota administration, they only had arranged 7 buses for sending our students to Punjab. They dropped students at Bathinda border from where our PRTC buses dropped them back to their native districts after medically examining them.”

Meanwhile, 1,000 pilgrims have come back from Nanded by hiring private vans or taxis. Out of these pilgrims, 8 have tested positive. While this news made the Punjab government order that all those coming from outside the state should be quarantined at government facilities, by the time the order came, those returning on Monday had left for their respective districts.

A state government’s press statement, Monday said that pilgrims and students who came on Monday were medical examined after following health protocol and were sent to their cities/villages.Around 2,900 workers from Jaisalmer are expected to arrive in Punjab on Tuesday and along with 1,000 pilgrims from Nanded.

Jaskaran Singh, Director, Punjab Roadways Transport Corporation, said, “Our 80 buses had gone. One of our driver Manjeet Singh died in Ratlam area due to heart attack. This bus brought back 33 passengers stuck at Ratlam. Manjeet’s body came in a private vehicle to his native village Badbar in Sangrur. He was a private employee, but Punjab CM has announced Rs 10 lakh compensation for his family.”

Pilgrims accuse Punjab govt of ‘harassing’ them over ‘fake news’

Fourteen pilgrims who returned from Nanded have accused the Punjab government of harassing them on the basis of ‘fake news’.

On Monday, Special Principal Secretary Punjab K B S Sidhu tweeted: “…The Maharashtrian driver of a Tempo Traveller who brought 14 pilgrims back to Patti, Tarn Taran district, has tested positive in his home state. Eleven of the pilgrims have (been) medically examined in Tarn Taran and were found to be asymptomatic. However, they have been admitted to the isolation ward of Civil Hospital since the driver had tested positive. Their samples shall be taken & request for early reporting shall be made to GNDH, ASR.  After receiving report, further action as per COVID-19 protocol shall be taken. Three pilgrims were from Moga. Moga DC has been informed and is taking appropriate action.”

Sidhu was tweeting about the pilgrims who had returned from Maharashtra on the intervening night of April 25 and 26 to Khemkaran. They had returned in a hired private vehicle, whose driver, Sidhu claimed, had tested positive the novel coronavirus.

The driver, Manjeet Singh, who is from Nanded, has uploaded a video from his Tempo traveller on the way back to Maharashtra, claiming that he was never tested. “I don’t know who is spreading rumours about me. But it is not true. I have never been tested for COVID-19,” Manjeet Singh told The Indian Express.