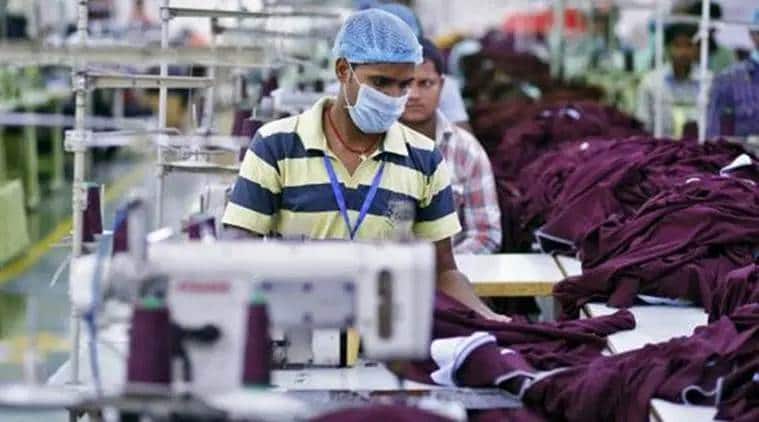 According to the figures accessed by The Indian Express, in April 2020, garment exports worth Rs 962.03 crore happened from India compared to Rs 9,786.03 crore in April, 2019. (Representational)

While garment exports have started picking up slowly, but overall the industry had registered a fall of 62.23 per cent in exports of readymade garments between April-June, 2020, compared to the corresponding period last year.

While orders from European countries, USA, Middle East are coming as they are looking for a market outside China, industry has not been able to utilise the opportunity fully as it is working with reduced labour and units are not ready for bulk manufacturing.

Harish Dua, owner of KG Exports, president of Knitwear and Apparel Exporters Organisation, an association for over 450 export units in Punjab, said,”These figures which show export across the country and clearly indicate that we are not able to take benefit of the current situation when Europe is looking for new markets to place orders. We are not able to meet their demands as we don’t have enough workforce and cannot do large scale production.”

He added,”I got huge orders from France and the Middle East in May and June, but I had to say no to majority of orders. I have a workforce of 600 persons but as of now, I have only 85 workers with me. Rest are in UP or Bihar and are not coming back as of now. Only 20 have come back till now. My machines are not fully operational.”

Dua explained, “I am a regular exporter of T-shirts to France. But raw material worth Rs 14-15 crore is lying blocked in my unit…I started making PPE kits and N-95 masks in April itself and hence, my unit was hardly closed for about 15 days. Still my workers left as everyone else was going. Now, we are seeking exports of PPE kits and masks to be done to other countries, as we are making them cheaper than China, but it is not being allowed.”

Parminder Singh, owner of Pruthi International who exports garments to USA and Middle East, said, “I made designer masks during lockdown so as to earn something as garment sale wasn’t happening. However, exports are going on in a limited manner to the US and Middle East as they too are in grip of Covid-19. Moreover, our previous payments have not been cleared by our clients in America and Middle East. I have no money to invest more in manufacturing and that too with 20 per cent labour.”

Neeraj Arya, owner of Different Garments, exports T-shirts to England and is also struggling with labour issue as his unit has about 100 workers against over 500 it employed usually. Rohan Dhir’s T-shirt making unit, which exports to Middle East, too has around 100 workers against 600 workers earlier.

“I think we should have been the busiest as of now to cater to newer markets but we are sitting idle. All thanks to our government that sent workers via free Shramik trains to their home states,” rued Dua.

He added,”Government should now provide us with a very less rate of interest, not more than 3 per cent, so as to tide over this crisis as people are not able to pay their bank limits and penalties are being imposed. ”

He observed that many orders from Europe were going back to China as Indian companies were not able to handle them.

Mon Jul 27 , 2020
Punjab recorded 534 fresh COVID-19 cases on Sunday and reported 15 deaths, taking the tally to 306, according to an official statement. The number of positive cases has reached 13,218. The major chunk of new cases, 95 and 83, were reported from Ludhiana and Patiala districts respectively. The Health department […]

AirTag: How to Use It, Android Support, and Everything Else You Need to Know