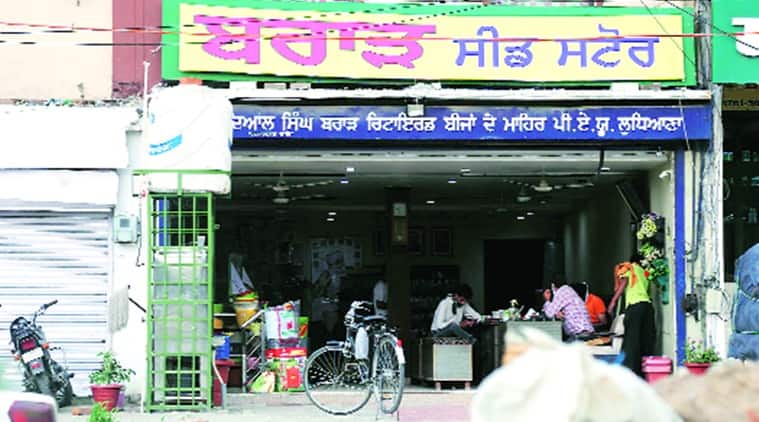 A raid was conducted at the ‘Brar Seed Store’, located opposite PAU campus, after farmers claimed it was illegally selling spurious seeds of PAU varieties at inflated prices.

A day after the Shiromani Akali Dal’s (SAD) allegations of a “multi-crore paddy seed scam” in Punjab, state varsity Punjab Agricultural University (PAU), Ludhiana, which has officially developed both paddy varieties whose seeds were allegedly sold to farmers by a private firm at inflated rates, has denied providing ‘source seed’ to any private company.

Speaking to The Indian Express, Tarsem Singh Dhillon, director (seeds), PAU said this was the first year that the varsity had sold ‘Truthfully Labelled’ (TL) seeds of two new paddy varieties — PR 128 and PR 129 — to farmers only.

He said the varsity has not produced ‘Breeder Seed’ and ‘Foundation Seed’ of both varieties yet as they are still awaiting notification from the central committee which functions under the Ministry of Agriculture and Indian Council of Agricultural Research (ICAR).

However, once the varieties are approved by the Punjab State Varietal Approval Committee which is headed by state director agriculture, the developer (in this case PAU) is allowed to sell TL seeds.

“PR 128 and PR 129 are our new varieties and they are yet to be notified by the central committee…We have not yet supplied ‘Breeder Seed’ and ‘Foundation Seed’ of these varieties to any private company. However, both varieties have been released following approval from the State Varietal Approval Committee and subsequently we sold TL seeds of these varieties to farmers this season for the first time. We are responsible for the purity and quality of TL seeds sold by PAU.”

“We don’t know from where the private company got the source seeds…Police should find out that,” said Dhillon to The Indian Express.

The row over seeds of PR 128 and PR 129 started after farmers complained that ‘Brar Seed Store’, a private seed store located opposite PAU campus, sold these seeds for Rs 200-250 per kg whereas in PAU campus, they were available for Rs 70/kg only. Seeds were allegedly sold under the brand of ‘Karnal Agri Seeds’ and an FIR was registered on May 11 in Ludhiana. The SAD has alleged that the owner of ‘Karnal Agri Seeds’ is related to Congress minister Sukhjinder Singh Randhawa, which the latter has categorically denied.

Dhillon said the varsity sold PR 128 TL seeds for Rs 70/kg and PR 129 seeds for Rs 62.50/kg to farmers. “Since our Kisan Mela wasn’t held this time due to coronavirus, we sold seeds via Krishi Vigyan Kendras (KVKs), Farm Advisory Service centres and our own seed production farms across the state,” he added.

Can private companies produce and sell seeds of PAU-developed varieties?

A senior PAU scientist and seed expert, requesting anonymity, said that seeds of every new crop variety go through an approved ‘Seed Cycle’, which requires approvals and permissions from both state and central governments at different stages.

“Before a new variety is released, the researcher/developer also sends seeds in small quantities to farmers across state for trials in fields to observe results. The first stage is ‘Nucleus Seed’ which only researchers/developers of variety can produce. Then using the progeny of the ‘Nucleus Seed’, the developer (in this case PAU) can make ‘Breeder Seed’. The ‘Breeder Seed’ is further used to make ‘Foundation Seed’ for larger production. Both ‘Breeder Seed’ and ‘Foundation Seed’ can be given to private companies, farmer bodies etc., but only after variety is notified by central government and several other approvals are taken. Using ‘Foundation Seed’, companies can produce ‘Certified Seeds’ and sell them in the open market but they cannot change the name of varieties,” he said.

However, central notifications take time (even 2-3 years) and before that varieties are released after approval from the State Variety Approval Committee. After state approval, TL seeds can be sold.

“Without getting source seeds from the authentic source (PAU), they multiplied seeds and sold them. Now if crops of those farmers who bought these seeds fail, it will be very difficult to know source of these seeds because even as they are PAU varieties, those seeds were not sold by PAU,” a senior plant breeding scientist from PAU said.

He added, “But the bigger issue is that the state agriculture department failed to control or cap prices of seeds sold privately even as they are empowered to do so as per Seeds Control Order, 1983. State agriculture department can cap and control prices of seeds in open market but they failed to do so and farmers were looted.”

“Paddy seed multiplication rate is very high and even if someone gets 1 kg seed, it can be multiplied to make upto 5 quintal seed,” he said.

While 20 kg seed is required to sow paddy in one hectare using traditional transplant method, the requirement is 25 kg/hectare in direct sowing method.

Punjab State Agriculture Director Dr Sutantar Kumar Airi told The Indian Express, “These are PAU varieties. From where else did source seeds reach the company? PAU has already sold 3,300 quintal of TL seeds of both varieties this season.”

Asked why his own department failed to check inflated rates in the market, he said, “We have in fact busted this entire scam. We raided the store.”

They never know what variety it is till official names aren’t released. The entire process is always top secret that lies with PAU, not us.”

Sun May 31 , 2020
Written by Raakhi Jagga | Ludhiana | Published: May 28, 2020 2:04:26 pm But alert has been sounded in all districts in the state as locusts can travel anywhere depending upon wind speed and direction. All Punjab districts have been put on alert after locust swarms reached several villages in […]