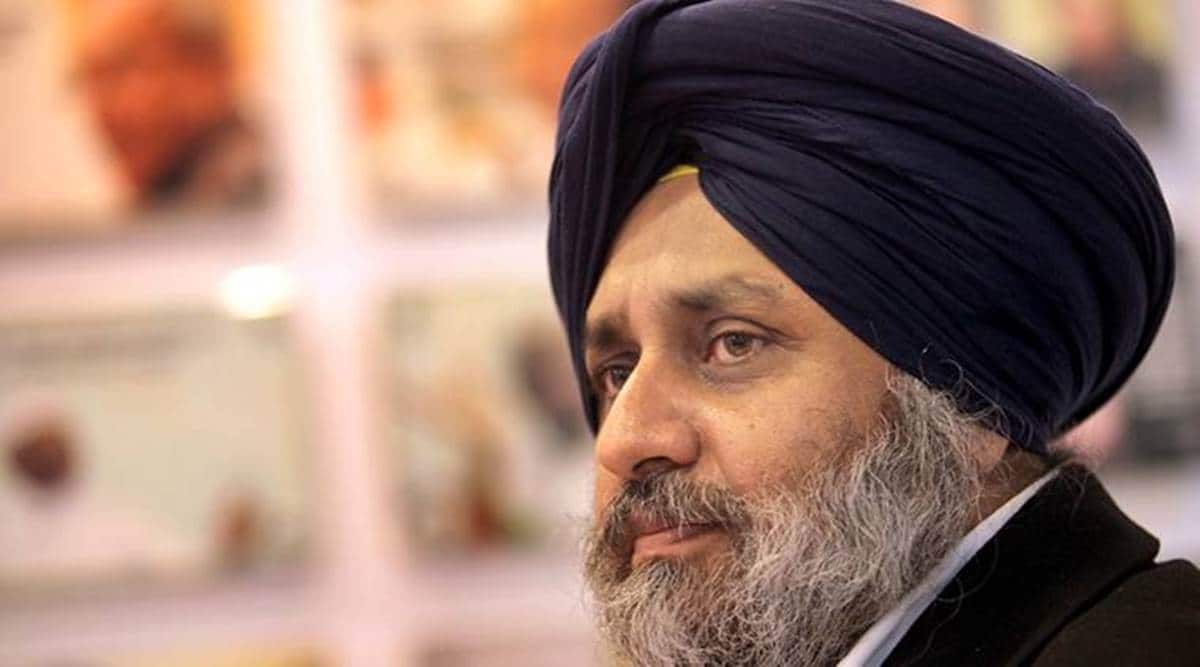 VIOLATING SOCIAL distancing norms, Shiromani Akali Dal President Sukhbir Singh Badal addressed a dharna against Hooch Tragedy in Khanna where he blamed Congress MLAs behind this liquor mafia. He also demanded action against Khanna MLA Gurkirat Kotli for his involvement in an illegal distillery. Dharna was organised on GT road Khanna under the elevated road where hundreds of Akali workers gathered, though majority were wearing masks but were throwing social distancing norms to winds as they were sitting  close to each other and were even sweating heavily. Speakers when used to go on mic for their speech used to keep their masks off despite the fact that a large number of supporters used to stand close to the main speaker jostling shoulders with each other.

SAD President Sukhbir Singh Badal was the main speaker while his brother-in-law and former Punjab Minister Bikramjit Singh Majithia also gave his speech. Meanwhile it was on August 7th dharnas on the issue of hooch tragedy issue had started . From August 7- August 10  SAD leaders lodged their protest in Chandigarh where  gathering used to be between 50-100 each day. On August 7, dharna started outside Patiala office on the issue of theft of Guru Granth Sahib Sarup which was led by Sukhbir Badal. Since August 7, dharna of 51 people is going outside SSP Patiala office and will continue till August 17.

On August 13, Sukhbir Badal had organised a dharna in Ghanaur in Patiala district where an illegal distillery was running and a probe is already going on in this case, even here hundreds of people had gathered. Meanwhile speaking on the occasion, Sukhbir Singh Badal  said  that  Congress legislators were running the liquor mafia in Punjab and Congress President Sonia Gandhi was a “bhagidar” in this racket and this was why chief minister Capt Amarinder Singh was not taking any action against the mafia.

Addressing a massive dharna in Khanna on Friday afternoon  against an alleged illegal distillery which was run in Bahomajra village in Khanna Tehsil  under the patronage of the Congress liquor mafia, the SAD President said Congressmen were looting the State causing not only a massive loss of Rs 5,600 crore in excise revenue but also leading to 130 deaths in the recent hooch tragedy.

Sukhbir  Badal said the erosion in excise revenue was a direct result of the Congress mafias. He said from revenue of Rs 5,000 crore during SAD-BJP tenure, the excise revenue had gone down to Rs 3,500 crore now during Congress rule. He said this was why there was no money to run social welfare schemes and atta-daal cards were being deleted and social welfare outlays were not being released.

Speaking on the occasion, senior leader Maheshinder Singh Grewal demanded the police to investigate the role of Congress legislator Gurkirat Kotli who is from Khanna  in the illegal distillery case. He said the Khanna police was deliberately going after the small fish instead of taking action against Congress leaders who had established the distillery in the first place.

Former minister Bikram Singh Majithia while speaking on the occasion said the illegal distillery had flourished when controversial SHO Baljinder Singh, who had committed brutality against a Gursikh family and a dalit, was posted in the  Khanna. He also demanded strict action should be taken against all police officials accused of dereliction of duty during the recent hooch tragedy. He said while action had been taken against a SHO and DSP in Tarn Taran, the SSP – Dhruv Dahiya had been rewarded by being posted in the same capacity to Amritsar Rural. He said it was also shocking that the chief minister had chosen to defend such an officer, who was accused of day light robbery in the Jalandhar cash seizure case, instead of taking action against him.

Meanwhile talking about the huge gathering which was violation of Covid guidelines  SDM Khanna Sandeep Sharma said,” police was on the spot when dharna was organised and we have videography of the event. Due police action is being taken against the organisers. FIR is being lodged for violating disaster management  act 2005. The law will take its own course.” Sharma who himself had been tested positive in the past and now is back to work said,” I can understand the side effects of such large gatherings as I myself had been a Covid patient. You can be a silent carrier as well even if you show no symptoms and sweat is a major cause of transmission if people sit close to each other. However, we will be taking action as per law.” Daljeet Singh Cheema, spokesperson of SAD when asked about such violations he said,” for dharna on a serious issue like Hooch tragedy which has killed over 130, one need to come out on roads. Dharna cannot be digital. We do take all precautions as workers are always wearing masks but at times for a public cause you need to hit the roads. Now, we will be organised our party meeting on August 18 to decide the future course of action in this issue. “

Gurkeerat Kotli, Congress MLA from Khanna said,” an illegal distillery was found in Bahomajra village which is in my constituency and police is taking action against the culprits. How come MLA is involved in this? They are issuless and hence are just finding ways to gather on roads amid high cases of Corona. If they are so concerned about this distillery they can get investigation done from any central agency as they are coalition partners in Union Government, if they are have no trust on state police.”