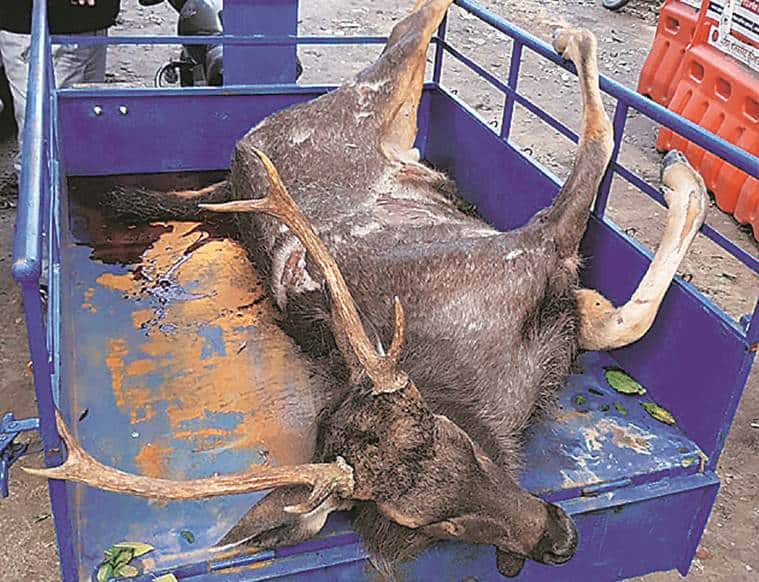 The animal appeared to have been hit by a vehicle. Gurmeet Singh

A SAMBAR deer died after being allegedly hit by a speeding vehicle while it was trying to cross the road on the Ladhowal-Jalandhar highway in Ludhiana Monday night.

A protected species under Schedule-III of the Wildlife (Protection) Act, 1972, the Sambar deer is also listed as a ‘vulnerable’ species on the International Union for Conservation of Nature’s (IUCN) Red list since 2008 due to incessant hunting and habitat destruction.

However, on Tuesday, the Ludhiana Police and wildlife department passed the buck over registering FIR and taking action against the erring driver.

Till the time of filing of this report, neither department had initiated action over the incident.

ASI Jagdev Singh from Salem Tabri police station, who reached the spot around 2 am when information was received, said the wildlife department under the district forest office had been informed and an FIR would be registered only if they file a complaint. “We have informed wildlife officials and they even took the body from us. We will file FIR only if a complaint is lodged. When we reached the spot, the animal was lying dead on the highway, probably hit by a speeding vehicle,” he said.

The wildlife department said the animal was cremated after an autopsy but added that they would “consult” police before taking action.

“Police has to register FIR and we are yet to consult with them. We will discuss once autopsy report is received tomorrow,” said Block Wildlife Officer Pargat Singh.

“We got the autopsy done at Guru Angad Veterinary and Animal Sciences University (GADVASU) and burial was done behind Deer Park at Neelon,” he added.

Khuswinder Singh, divisional forest officer (wildlife), Phillaur, said that since the Sambhar deer is a protected species, both police and wildlife can register FIRs at their own level. “In accident cases, we need to see what can be done and we will take a decision on this tomorrow (Wednesday). Police might have registered an FIR at their own level too,” he said.

Experts said that in the case of death of a animal that is a protected species, neither police nor wildlife department can let the case go without a probe, and have to register FIR.

Sandeep Jain, honorary state animal welfare officer (Punjab), Animal Welfare Board of India (AWBI), said, “Police have to register an FIR against unidentified persons if a vehicle has killed a protected species and start the investigation. Even wildlife department has the power to register a case at their own level under Wildlife Protection Act (WPA).”

Fri Jun 12 , 2020
Barricades put up at a check-post at Punjab and Haryana border adjoining Sriganganagar and Hanumangarh on Thur…Read More JAIPUR: Persons coming to Rajasthan from other states do not require NOC (no-objection certificate) and the inter-state movement of people has been regulated considering the Covid threat, additional chief secretary (ACS), home, […]