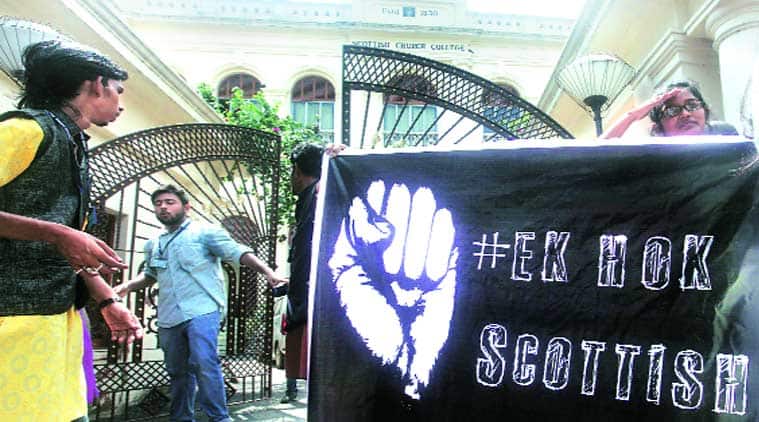 Outside the Scottish Church College in Kolkata on Tuesday. (Source: Express photo by Partha Paul)

A move to convert a dress code order into an “advisory for parents” has failed to appease the students at Scottish Church College, who launched a major movement with additional demands, including removal of rector and immediate rollback of hiked fee, forcing the authorities to suspend admissions to undergraduate courses, which was to begin Tuesday.

“The admission process has been deferred till further notice due to unavoidable circumstances. The new schedule will be announced later through the college notice board and the website. The same merit list will remain valid,” a notice put out by the college said.

Earlier, members of Scottish Church College Students’ Union put up a demonstration in the morning just as counseling process for admissions was to begin at 10 am.

The raised slogans of “rector, go back” and “amader dabi mante hobey, nahole godi chharte hobey (consider our demands or quit the post)”.

Hundreds of applicants along with their guardians and parents from various parts of the state and outside had gathered at the campus here since morning.

But after a meeting between the agitating students and college authorities failed, the admissions were canceled.

“How can the admissions go on when students are blocking the main entrance of the college and stopping guardians from entering? Under such a situation it is not possible to carry on admissions. We are waiting for the situation to calm down,” college rector John Abraham said.
“I had thought, this is a premier institution free from all politics,” said Abhijit Das, guardian of Tanusree Saha who had come from Bhutan to take admission at the Scottish Church College. Till afternoon, he was not aware that the admission process has been put on hold.

Shubhashlok Dwibedi, the students’ union president, however, said: “It is not only the dress code but a culmination of several issues. After the principal retired, a new post of rector had been created. We demand the resignation of the rector as well as the senate secretary, Mausumi Manna. We are also demanding rollback of fee hike,” he said.

On the other hand, college authorities said the admission process will begin only after the students withdrew their agitation. It also refused to agree to any of the students’ demand.

“They have come up with a 14-point demand, one of which is permitting a student’s representative in the teachers’ council. We conduct everything in a transparent manner and there is no way we can agree to any of their demands,” said rector John Abraham.

On the dress code, Abraham said the first notice was put up after a senators’ meeting, which is part of the governing body of the college and comprises representatives of teachers, students and diocese of Calcutta.

“Everyone had agreed to it but had refused to sign the minutes saying that it would not be necessary. Later when the controversy started, at the request of the college council, I revised the notice. It is now an advisory for parents,” Abraham claimed.

The students’ union, however, said autocracy was at work in the name of autonomy in the college. “We could not put forward even four of the 14 demands when the rector declared admission process suspended. It is another example of the autocratic attitude of the rector. We demand his immediate resignation,” said Sayak Banerjee, general secretary of the students’ union.

The protest also received solidarity from the Periods Group at Jadavpur University, which was in news recently for their sanitary napkin movement. “We support the protesting students and condemn the authorities’ attitude as dictators. We will soon go to Scottish Church College and join the protesting students,” said Arumita Mitra, one of the senior members of Periods.