To connect with Amethi, Smriti meets locals twice a month 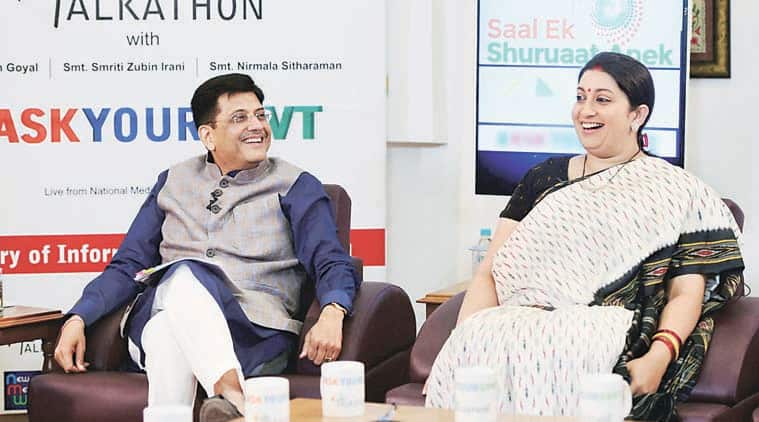 To make her presence felt among the people of Amethi, Union Human Resource Development Minister Smriti Irani has adopted the system Congress leaders Rahul Gandhi and Priyanka Gandhi Vadra to meet locals for redressal of their grievances.

Since March, Irani has been meeting locals from Amethi every 15 days — 1st and 15th of every month — at her Delhi residence. To ensure that people from Amethi get proper attention, Irani has engaged three public relations officers who attend to the phone calls and applications from locals approaching the Union minister.

“Smriti Irani has fixed two dates every month to meet people from Amethi. Those visiting the local BJP office with their complaints and wanted to meet Irani are informed that they can visit her in Delhi on 1st and 15th of each month. The applications dropped at BJP’s Amethi office are dispatched to Irani’s Delhi residence for redressal,” said Durgesh Tripathi, BJP Amethi district president.

He added: “Smritiji herself remains in touch with local party office bearers and knows names of at least 20 to 40 people in each mandal units in Amethi.”

Irani has directed the party’s local unit to identify a place where a permanent district unit office could be set up. At present, the party office is being run from rented rooms in a guest house. The district unit is also preparing a report of the works that have been taken up in the constituency on Irani’s initiative during the last one year.

Five-time MLA from Gauriganj and veteran BJP leader Tej Bhan Singh said, “The party has seen revival here because it has got a strong leader like Smriti Irani, who is taking care of the people of Amethi even after loosing she lost the constituency in the Lok Sabha polls.”

“Smritiji frequently visits the district and has deputed staff from Delhi to visit Amethi at least once every month and meet locals. Her PRO Vijay Gupta is here today… This is for the first time that I find the party organsiation active even after losing the election,” he added.

Irani has visited the district twice this month — on May 12 and 26. She has announced various schemes during her visits and paid around Rs 3 lakh as the first year’s premium under Pradhan Mantri Suraksha Beema Yojana for around 25,000 Below Poverty Line category villagers. The minister has also announced a railway line between

Unchahar (Rae Bareli) and Amethi and allocated Rs 40 crore for doubling of railway track between the two districts.

A degree college for girls, a girls’ polytechnic and a skill development college for both boys and girls has also been announced for Amethi.