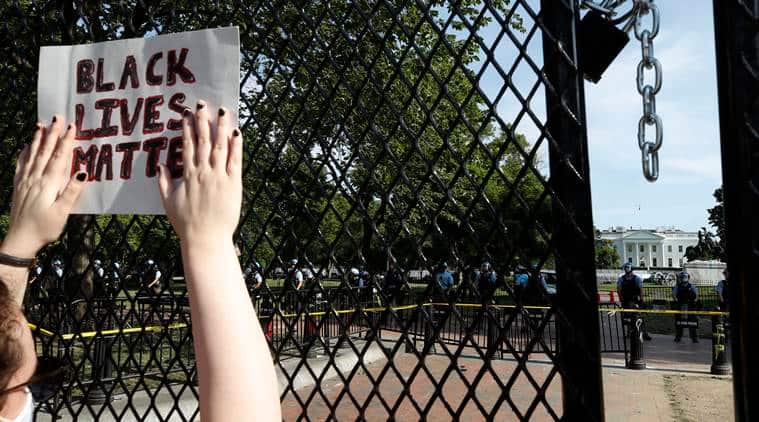 Demonstrators gather to protest the death of George Floyd near the White House in Washington. Floyd died after being restrained by Minneapolis police officers. (AP Photo/Alex Brandon)

The Trump administration floated the idea of taking control of Washington’s police department amid nationwide protests over police brutality, according to media reports on Tuesday.

US President Donald Trump said in remarks in the White House Rose Garden on Monday he would deploy thousands of soldiers and law enforcement officers to halt violence in the U.S. capital and threatened to do the same in other cities.

“I think you heard the president yesterday that he wanted a show of force in D.C. and we know that they examined a lot of ways to do that,” Muriel Bowser, the city’s mayor, told reporters on Tuesday.

Her office told reporters the Trump administration had floated the idea of federalizing the district’s 4,000-member police force, the Washington Post and the local NBC affiliate reported earlier.

The district’s Metropolitan Police Department did not immediately respond to requests for comment.

Washington, D.C. is among several U.S. cities engulfed by protests sparked by the death of George Floyd, an African-American man who died in police custody in Minneapolis after an officer, who was later fired and charged with murder and manslaughter, pressed his knee onto Floyd’s neck for some nine minutes.

Protesters outside the White House were forcibly pushed back and reported being tear-gassed by police on Monday before Trump walked to a nearby church.

A White House spokesman said the US Park Police were reacting after the protesters ignored orders to clear the area. The U.S. Park Police confirmed the statement and said smoke canisters and pepper balls were employed.

George Floyd’s death: Can Trump send the US military to quell violence at protests? Demonstrators gather to protest the death of George Floyd near the White House in Washington. Floyd died after being restrained by Minneapolis police officers. (AP Photo/Alex Brandon)

U.S. state governors are in control of the local national guard, but in Washington the guard reports to the president. The city is also home to dozens of federal agencies with their own active law enforcement.

The protests come as millions of Americans are unemployed as a result of the economic fallout from the coronavirus pandemic, which has sickened 1.8 million and killed more than 105,000 people in the United States.

Wed Jun 3 , 2020
MUMBAI: Rain accompanied by strong, gusty winds lashed parts of the city on Tuesday as it braced for the impact of cyclonic storm Nisarga that is expected to make landfall south of it on Wednesday afternoon. With a red alert warning for Mumbai, Thane and Palghar issued by the India […]