‘We walked 600 km on foot, nobody even offered us water’ 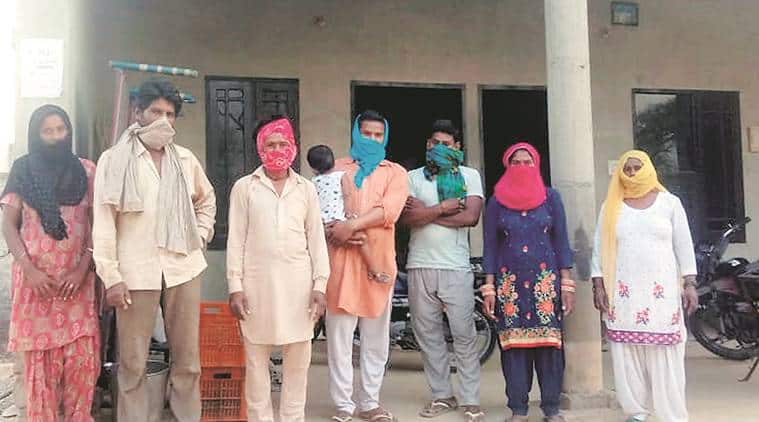 Sukhdev Singh, his family and others walked through a sandy desert amid the lockdown. (Express photo)

AS SUKHDEV Singh stepped out of his house for the first time after 21 days of quarantine Sunday morning, what he still had on mind was his 9-day homeward journey through locked down towns and villages from Rajasthan’s Jaislamer to Punjab’s Muktsar. The 21-year-old was part of a group of 21 — around three families — that walked over 600 km through the desert’s sandy terrain to avoid main roads amid a strict lockdown. The journey started on April 16 on foot and ended on April 25, only to be followed by isolation at home.

Like every year, this group from Muktsar’s Gandar village had gone to Jaisalmer’s Suthar Mandi in March for harvesting of green gram (hara chholiya). Stuck without work, they decided to walk back as the country moved into Lockdown 2.0.

Recalling the unforgiving journey, Sukhdev said: “It was strict curfew when we started on April 16 and we came through uneven, sandy area of desert so as to save ourselves from cops standing on main roads. It is around 602 km from Suthar Mandi to our village, but I think we travelled more. No one helped us on the way, even no one allowed us to drink water from irrigation channels. If villagers saw us they clearly told us that we may infect their water.”
Part of the group that walked back were women and children.

Gurdev Singh travelled with his expectant wife, Naseeb Kaur, and the couple’s 6-year-old daughter. He said: “We were not even allowed to enter any village along the way even if we wanted to take rest under shade of a tree. I was along with my wife and a 6-year-old daughter.”

Veerpal Kaur, who is expecting her first child, returned in this state. Another family in the group had a 3-month old daughter.

Sukhdev said, “On our way back, we saw many other Punjabis also walking back on foot. We also saw one person collapse and die due to lack of water. We don’t know as how they would have managed to reach their village with the dead body.”

The group said they made it back sustaining themselves supplies they carried along including wheat flour, gur, chana and milk powder. Sukhdev said, “We would cook rotis by using dry branches picked along the way. We used milk powder to feed the children and make tea. We were pained that no one helped us all along the way despite the fact that we had children along in our group.”

While the painful journey and the quarantine is over, the group of farm labourers is now worried about making ends meet.

“As labour is not involved in cotton sowing, now we are waiting for paddy sowing season. We are ready to do it provided farmers choose us instead of migrant workers. We too are farm labour like the migrants and are in need
of money,” said Sukhdev.

Gurdev Singh, another farm worker, added: “We could not work after March 21. We waited for few days in the village and then started on April 16 on foot.”

Congress leader Jaijeet Singh Johal, who is brother-in-law of Punjab FM Manpreet Singh Badal and hails from the same village, said: “We are pained to hear their story. Punjab is the land of langars and they came walking without even a drop of water being offered to them all the way. I will help them financially and also provide them ration from government’s side.